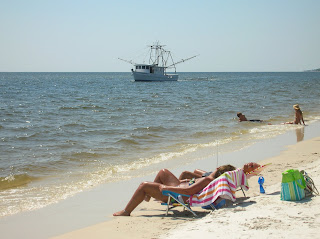 Florida's efforts to reverse the decline of coastal and ocean resources earned only a C grade today from a coalition of environmental groups who want the state to show more national leadership on ocean issues.

The coalition of seven groups called on Florida to restrict development in sensitive coastal areas, establish an ocean and coastal policy office and re-establish its opposition to oil drilling in the Gulf of Mexico.

"The coasts are the bedrock of Florida's economic engine," said Gary Appelson, policy director of the Caribbean Conservation Corp. and the Sea Turtle Survival League. "We cannot continue to build along the coast as we have been in the past."

The "report card" rated the state on its progress toward meeting recommendations in eight policy areas set out by the coalition in its 2006 "Blueprint for Economic and Environmental Leadership."

The groups credited Gov. Charlie Crist for taking a national leadership role in reducing global warming pollution. In 2007, Crist signed three executive orders calling for pollution reductions from electric utilities and automobiles and he pushed for approval of a comprehensive energy bill in the 2008 legislative session.

But the groups also pointed out that Crist, during the 2008 presidential election, supported Republican John McCain's call for oil drilling in the Gulf of Mexico, though Crist later said drilling must be far enough away to protect Florida's beaches and tourism. The groups said a moratorium on drilling in the eastern Gulf of Mexico that expired last year should be re-established to protect the coast and the state's tourism economy.

"On most issues we agree with the Governor's Office," said Joe Murphy, Florida program director for the Gulf Restoration Network. "We are hopeful on this issue he will revisit this and agree with previous governors going back 20 years that protecting Florida's economy, environment and military programs are the most important things that can be done."

The groups faulted the National Park Service, the Florida Department of Environmental Protection and the Florida Fish and Wildlife Conservation Commission for failing to implement ecosystem-based management in the Biscayne Bay National Park and the adjoining state preserve. As a result, both areas now are managed as nothing more than "paper parks," the groups said.

Other states, including California, Massachusetts, New York, Oregon and Rhode Island, have moved forward with establishing marine reserves where fishing is prohibited and other marine protected areas. But Florida has not established marine protected areas within its 41 state aquatic preserves, the groups said.

"We sadly conclude the state has made no progress in the past year or two on restoring marine ecosystems through ecosystem-based management," said David White, regional director for The Ocean Conservancy.

DEP appreciates the coalition's comments, a department spokesman said. DEP also issued a detailed response, including that the D grade regarding oil drilling may not reflect the present reality that drilling isn't actually taking place.

Regarding the need for marine protected areas, DEP responded that its Coral Reef Conservation Program is helping protect 239,000 acres from Biscayne National Park to St. Lucie Inlet in Martin County. However, White, of the Ocean Conservancy, said neither DEP nor the Fish and Wildlife Conservation Commission are addressing overfishing in that area.

The department said it has established recommended practices for coastal construction. And on oceans governance, DEP said it held workshops in 2008 to receive input on priorities and goals for a federal Gulf of Mexico Alliance plan that will be put out later this year.

"Certainly at DEP we can always work to improve ourselves," Press Secretary Doug Tobin said. "We look at the report card as a way of improving what we do to protect Florida's vital resources."