By Bruce Ritchie
A Senate committee chairman has introduced a bill that could be used to block Florida's purchase of up to 187,000 acres from U.S. Sugar Corp. for Everglades restoration.

SB 1436, by Sen. Mike Bennett, R-Bradenton, would require water management districts to win voter approval before issuing certificates of participation, the same type of bonds being used by the South Florida Water Management District to buy the U.S. Sugar land for $1.34 billion contingent upon financing.

Bennett's Senate Committee on Community Affairs today heard from local elected officials and bankers in the Clewiston area who cited a University of Florida study saying the deal would cost 10,700 jobs statewide. Much of the economic impact would be in Glades County and in Hendry County, where the company's sugar mill and citrus processing plant are located.

Asked by reporters whether the bill was aimed at killing the deal, Bennett said the legislation was aimed at all five water-management districts. He noted that their boards are appointed -- not elected -- and have authority to raise taxes. 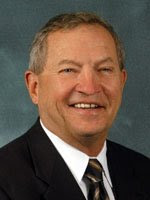 "I feel if they have the ability to raise taxes, that is taxation without representation," Bennett said. "I thought we got rid of that premise a couple of hundred years ago."

Carol Ann Wehle, executive director of the South Florida Water Management District, said the boundaries of the state's five water-management districts are drawn based on water flow, not political or voting precinct lines.

"There is no way to have an election," she said.

And Eric Draper, policy director for Audubon of Florida, said he thinks the bill is a a "dishonest" way to stop Everglades restoration. He said the U.S. Sugar land won't be turned over to the state for seven years.

"I think it's grandstanding to try to make a point but he won't be successful with it," Draper said.

The purchase was supported by environmental groups after it was proposed by Crist last summer but it has since run into opposition from some legislators and local officials in the Clewiston area. They're concerned that U.S. Sugar will close its sugar mill and citrus processing refinery, sending the area into an economic tailspin.

Hendry County Commissioner Kevin McCarthy said local residents have submitted ideas for attracting new jobs. But he said the state needs to put in a plan -- with money -- for replacing those 10,000 jobs.

Wehle said the district is setting aside 3,000 acres for local economic development and is studying the economic impact of Everglades restoration.

"Everything that we can do under our jurisdiction we are doing," she said. "It's just that we don't do economic planning."

Sole said the Governor's Office of Tourism, Trade and Economic Development is working with area residents to come up with a jobs plan.

"Without question there is a lot of work that needs to be done," Sole said. "You don't just make a plan in seven months. It takes time. It takes a lot of feedback from the community."