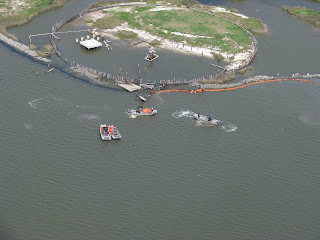 Environmentalists are pointing to an oil spill this week in Louisiana as evidence the state and federal governments should not allow more offshore oil drilling.

President Obama last week said his administration will allow exploration and drilling off the Atlantic coast of north Florida and within 125 miles of the Florida peninsula in the Gulf of Mexico. Opening Florida waters to oil drilling has support from the incoming leaders of the Legislature in 2011.

A pipeline accident reported Tuesday 10 miles southeast of Venice, La. resulted in 18,000 gallons of crude oil being spilled, according to the Coast Guard. The spill initially covered 136 square miles in the Delta National Wildlife Refuge. The Coast Guard, which is leading the cleanup, reported Friday that the impact area had been reduced to 16 square miles. Sen. Mike Haridopolos, R-Melborne and Senate president-elect, has introduced SB to allow drilling.

Rep. Dean Cannon, R-Winter Park and the House speaker-designate for 2011, chairs the House Select Policy Council on Strategic & Economic Planning that has been holding hearings towards developing drilling legislation.

"As this latest Gulf oil spill tragically illustrates, it's not a matter of if, but when, such as spill will happen along Florida's coast if Dean Cannon gets his way," Progress Florida Executive Director Mark Ferrulo said in a statement Friday. The Sierra Club also pointed to the spill as a reason to oppose more drilling.

Cannon and other drilling supporters could not be reached for comment on Friday. Rep. Seth McKeel, R-Lakeland and sponsor of a resolution that calls for drilling in federal waters, said he had not read enough about the Louisiana spill to comment.