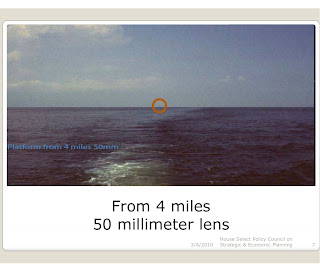 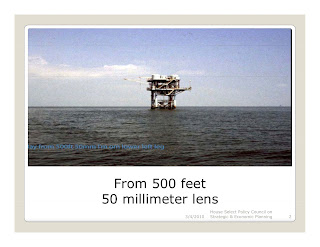 Images from report by the Collins Center for Public Policy report on oil drilling to the Century Commission for a Sustainable Florida. To download the report, click here.

A draft proposed House council bill would open Florida's waters to oil drilling but would ban permanent rigs and platforms above the water's surface within six miles of the coast.

The House Select Policy Council on Strategic & Economic Planning has been holding hearings towards developing a bill to allow drilling in state waters extending 10.36 miles from shore. Drilling supporters say oil and gas production could stimulate the economy and reduce dependence on foreign oil while opponents say drilling threatens fishing and the state's tourism economy.

The 41-page draft council bill requires the governor and Cabinet twice a year to offer lease sales for oil and gas exploration, according to a bill summary. The Cabinet must defer to the U.S. Secretary of Defense to determine if there are potential conflicts with current or future military activities.

The bill intends to prevent rigs from being visible from the shore by banning permanent structures within six miles. Temporary rigs would be allowed for up to one year within three miles of the shore.

Sub-sea drilling and production would seemed to be allowed within one mile of the shore or an aquatic preserve if the bill were adopted. Local governments appear to be prohibited from restricting drilling in coastal waters.

The bill also requires a $1 million fee for the nomination of a lease area and a $500-million surety bond or line of credit is required for producing oil and gas. Before an exploration or production permit is issued, companies must submit environmental assessments that include commercial fishing, sensitive biological resources including sea turtles and marine mammals, and threatened and endangered species.

Companies also must submit plans for dealing with waste processing and oil spills. The council is scheduled to meet today to discuss the draft bill. To download a copy of the bill as part of the committee meeting packet, click here.

I created some images of what beach-goers may have to look forward to if they embrace Cannon and Haridopolos' Bills allowing off shore oil drilling only 3 miles from shore. http://www.facebook.com/album.php?aid=125439&id=556924836&l=715b1394f0