Representatives of eleven environmental groups called on the House Monday to adopt legislation reauthorizing the state's land planning agency. The Legislature in 2006 established a "sunset review" process for state agencies to determine whether a need for them exists.

HB 7107 would reauthorize the Florida Department of Community Affairs but it has been stalled in the House Economic Development & Community Affairs Policy Council. The bill's Senate companion, SB 282, passed the Senate last week and is waiting to be taken up by the House. 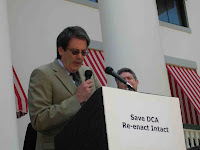 Not taking action is a "formula for disaster next year" when legislators are not up for re-election and under the scrutiny of voters, Charles Pattison, president of 1000 Friends of Florida, said during a rally on the steps of the historic state Capitol. "The future of our great state," he said, "depends on taking action this week."

Jill Chamberlin, spokeswoman for House Speaker Larry Cretul, R-Ocala, responded that the budget has been a higher priority issue right now. "It is not a question of being opposed (to reauthorization)," she said. "There is no reason to think there will be any change in DCA next year."

Supporters of Amendment 4, a state constitution amendment that requires voter approval of comprehensive land use plan changes, said after the rally that not reauthorizing DCA will generate support for the amendment, which business groups oppose.

To download a letter from environmental groups to Cretul, go to http://1000fof.org/reform/10dc .