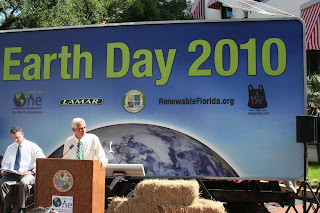 Gov. Charlie Crist celebrated Earth Day on Thursday by saying that residents have a duty to work together while Florida Forever supporters said they want more money for the land-buying program than is being discussed in the Legislature.

Several businesses and partnerships announced initiatives to mark the Earth Day celebration at the Capitol as hundreds of schoolchildren listened to speeches and viewed environmental displays.

Florida Forever supporters said the Legislature should authorize $50 million in bonding in 2010-11 instead of $15 million in cash as the Senate has proposed or $14 million as offered by House budget negotiators.

The state could bond about $50 million with about one-third of the cash for debt service that the House and Senate have proposed, said Greg Chelius, state director of The Trust for Public Land.

"We could buy land now at prices we haven't seen in a decade," Chelius said in an interview following a news conference. "It is the best time to buy and protect land in Florida.

Earlier in the day, Crist praised the "teamwork" of business recycling efforts and the Lamar Advertising Co.'s announcement that it will use solar energy to light 1,300 billboards across the state. Florida Retail Federation and the American Chemistry Council touted the "A Bag’s Life" campaign, promoting the reducing, reusing and recycling of plastic bags..

The Florida Department of Environmental Protection earlier this week announced an environmental awareness campaign and blog at the department's web site, www.dep.state.fl.us/EasyAsOne .

The Florida Medical Association launched its "Green Doctor Office" program. MyGreenDoctor.org is a resource for physicians who seek to create more sustainable offices and open a dialogue with patients regarding environmental issues that can affect their health, according to FMA.