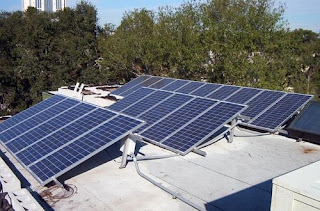 Instead, commissioners said they may reconsider the conservation goals set by the PSC only two years ago -- before the Legislature removed four of the five commission members at the time.

"Sometimes certain things work during certain periods and they make sense in terms of policy," Commissioner Ronald Brise said. "But when things change, sometimes we may have to change with the times to address the issues that are before us."

The PSC voted to reject plans for Florida Power & Light Co. and Progress Energy required under the Florida Energy Efficiency and Conservation Act (FEECA) of 2008.

Instead the commission is asking that all seven of the state's largest utilities tell the agency how quickly they can provide updated information that can be used for setting new conservation goals. The decision on Tuesday leaves existing conservation programs, including solar rebate programs, in place at Progress Energy and FPL.

The agency staff had recommended approval of an alternative plan submitted by Progress Energy because of concerns about the cost to the utility's 1.6 million customers. That alternative plan would raise the monthly conservation cost from $3.24 now to a peak of $6.13 in 2014.

That plan would not have met the conservation goals set by the agency in 2009. A plan to meet those goals would have increased the monthly cost to $11.28 next year and $20 by 2017.

Agency staff recommended approval of an FPL plan that would meet the energy-saving goals set by the commission. That plan would have raised the monthly conservation cost for the average customer from $2.26 now to $4.11 in 2014.

Progress Energy officials said the agency set higher conservation goals for them compared to other utilities and they don't know why. They said achieving greater energy savings over existing conservation programs would cost more.

A representative of the Florida Industrial Power Users Group warned the commission that electricity rates are a key factor when companies decide to open plants and bring new jobs to Florida.

And the Southern Alliance for Clean Energy, which supported the conservation goals, argued that the PSC failed to conduct a thorough analysis to determine why Progress Energy conservation programs would cost so much more than for other utilities.

Commissioner Julie I. Brown asked whether the goals set by the PSC in 2009 were "too lofty." She is among the four new commissioners who replaced four commissioners last year when four reform-minded commissioners were not reappointed or confirmed.

Commissioner Lisa Edgar, the only commissioner remaining from 2009, responded that those goals were "robust and aspirational" as provided by state law. She said the law also provides flexibility for commissioners to re-examine the goals they have set.

After the meeting, Tom Larson of the Southern Alliance for Clean Energy said the commission had "punted" on approving conservation programs that would benefit Florida residents.

He noted that the PSC on Tuesday also approved making more FPL commercial and industrial electricity customers eligible for a discount because they locate new operations in Florida or expand existing operations. Larson said no one asked what the rate impact would be on customers as they did with the conservation measures.

"One side of the mouth says one thing," Larson said of the PSC. "The next docket (case), they say the next thing."

Photo by Intergrated Building and Construction Solutions. Story copyrighted by Bruce Ritchie and FloridaEnvironments.com. Do not copy or redistribute without permission, which can be obtained by contacting brucebritchie@gmail.com.)
Posted by Bruce Ritchie at 7/26/2011 02:05:00 PM