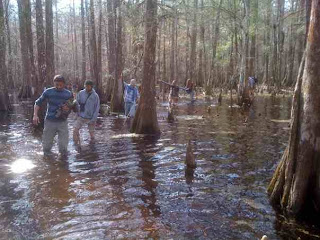 The governor and Cabinet approved the purchase of a 506-acre addition to Paynes Prairie State Preserve State Park near Gainesville and a new Florida Forever conservation land-buying list.

Florida Forever is the largest land-buying program in the nation, with 2.4 million acres purchased by the state since 1990. But the future of the program is in doubt as it received no money from the Legislature last year.

Both items were approved without objections by the Cabinet. But after voting for the new state purchase list and the Paynes Prairie addition, Agriculture Commissioner Charles H. Bronson renewed his criticism of the program and said he won't vote to approve new purchases.

"From an economic standpoint we're in a real crunch," Bronson said. "That money today that even is available for land could be used for other things."

The purchase of property along Prairie Creek will help preserve a popular canoeing trail and help park managers maintain their property, purchase supporters said. The Cabinet voted to buy the land from Alachua Conservation Trust for $2.1 million.

"It's one of the great gems of Alachua County," said Robert "Hutch" Hutchinson, executive director of Alachua Conservation Trust. "Literally, it's been on acquisition lists for 40 years."

I'm not much of a voter because I believe that government shouldn't determine our lives. We should! However, if Bronson decides he wants to do away with the Florida Forever program, than I might make an appearance at the voting poles.