Two environmental groups served notice today that they plan to sue federal officials for failing to take steps to protect the Florida panther.

The only population of Florida panthers is located in Southwest Florida where they face loss of habitat from development and threats from traffic while crossing roads. Perhaps fewer than 120 exist there in the wild.

The Sierra Club and the Conservancy of Southwest Florida say the U.S. Fish and Wildlife Service failed to respond to a petition earlier this year requesting the designation "critical" habitat to protect the panther. The groups today submitted a notice with the federal agency saying they intend to sue within 60 days under the federal Endangered Species Act.

Instead of taking action, the federal agency "has allowed the petitions -- and the panther -- to continue to languish, even as habitat destruction and other threats to the panther's survival intensify," the letter said.

Agency spokesman Ken Warren in Vero Beach declined to respond to the letter, saying the agency typically doesn't comment publicly on legal matters. But he also said the agency is working to protect a larger area in Southwest Florida than the groups are seeking to have designated as critical habitat. 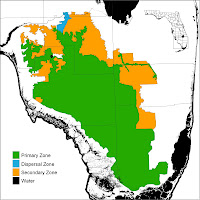 The groups point to a 2006 article in Biological Conservation by state and federal biologists and other researchers. The authors identified a "primary" zone, with the most important habitat, and a "secondary" zone that panthers could use more as the population grows. A "dispersal" zone is proposed that allows panthers to move outside of South Florida.

The Fish and Wildlife Service believes it is on a good path now working with partners to protect habitat, including restoration of the 55,000-acre Picayune Strand, Warren said.

"We haven't closed the door completely on establishing critical habitat," he said. "We continute to weigh the merits of doing so. The bottom line is if we decide designating critical habitat is truly in the best interest of the Florida panther we will do so."