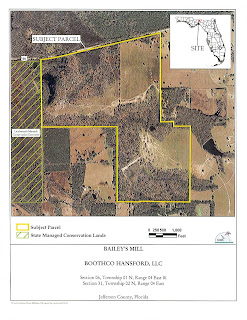 It looks like a sweetheart deal, though it's not clear yet who in the Legislature helped set it up.

A 436-acre parcel approved Tuesday by the Cabinet for purchase was the only one considered by the state under a $3.2-million special legislative appropriation for land acquisition.

The governor and Cabinet without discussion agreed to pay $1,975,000 for a conservation easement on 436 acres owned by Boothco Hansford LLC, which is managed by Tallahassee developer Hurley Booth. Appraisals supported the purchase price for the deal.

The state won't actually own the land, called Bailey's Mill, and there will be only limited public access. The state is paying Booth not to develop the property, although construction of a single home of up to 7,500 square feet -- which is a small mansion -- will be allowed.

Cattle will not be allowed on the property but trees can be cut down and sold in areas where timber operations have occurred in the past, DEP Secretary Michael Sole told the Cabinet on Tuesday.

A site review found that 40 percent was improved pasture and former watermelon fields. Still, the state Acquisition and Restoration Council in April voted to recommend purchase by the governor and Cabinet -- though the proposal was withdrawn by Booth from further consideration before it could be ranked against other parcels on the Florida Forever list awaiting state purchase.

DEP Secretary Michael Sole told reporters on Tuesday that there was discussion in the Legislature last year about setting aside money specifically for Bailey's Mill property or for other conservation easements but he said he didn't know why.

"There was reference to Bailey's Mill historically for acquisition, but when the appropriation act came out it was just, 'You get $3.2 million for acquisition of state land' " with no designation of property to be purchased, Sole said.

DEP spokeswoman Amy Graham said Booth contacted DEP shortly after the 2008-09 budget was announced. Booth did not respond to messages left for him at his Tallahassee office.

"He indicated he had a parcel that he felt was worthy of the state's purchase," Graham said. "And we began negotiations with him knowing that we had this specific appropriation and we proceeded to put it through the process to confirm that it met the criteria for acquisition, which it did."

The Legislature in 2008 approved $300 million in bonding authority for Florida Forever in addition to the $3.2 million appropriation being used to buy Booth's property. This year, the Legislature refused to provide any money for the state land-buying program for the first time since 1990.

Booth was involved in a controversial purchase at Letchworth Mounds in 2005. The state purchased from the Conservation Fund an option to buy land owned by Booth surrounding Letchworth Mounds.

The Cabinet agreed to buy 109 acres plus a conservation easement on 1,281 acres around the existing park only after then-Gov. Jeb Bush agreed to drop his objections. Bush initially said the $4.7-million purchase price was too steep.

The state Acquisition and Restoration Council earlier this year was told that the Division of Historical Resources said there are no archaeological sites of historical significance on the Bailey's Mill property. But DHR officials did note that the tract could buffer and protect Letchworth Mounds State Park less than a mile away.

A report by DEP's Division of State Land said Bailey's Mill contained no "strategic habitat" as identified by state wildlife officials but there was potential habitat for endangered wood storks. The site was ranked "medium" for water quality protection by DEP.

Sole said money remaining from $3.2 million appropriation for land acquisition won't be spent to buy other land. That's because land purchased outside of the Florida Forever program do not receive the higher level of protection from resale as lands purchased within Florida Forever, he said.

In most cases, land purchased for conservation cannot be developed anyway....why is our tax money going for this type of deal? You have land which may be ecologically sensitive and should be conserved, go ahead and try to develop it! It's usually swampland which does not garner a premium price per acre. Your best bet by far is to hit up a governmental entity - if you're successful, it's like hitting the lotto! Good luck!

So by saying "sweetheart deal," does that imply that, possibly, this land became the free back yard of whoever lives in this grand mansion that is allowed?

Thanks for your comments. In response to Andrew, I labeled it "sweetheart deal" because of the legislative appropriation that allowed it to be purchased without having to compete against other projects. The ability to build a 7,500-square foot home (plus 3,000 square feet of ancillary buildings) instead goes to the question of whether the conservation easement is worth what the state is paying for it.

Regarding the anonymous comment of whether ecologically sensitive land should be purchased because it can't be developed anyway -- such land often can be logged or coverted to agricultural uses, subdivided into smaller lots and sold. Certainly the wildlife and public use values go down if one home per five acres, or 10 acres, is allowed.

I received a few comments privately from readers who suggested that my story was critical of conservation easements. That was not intended.

I had to point out that the state does not actually own the land to distinguish it from most land purchases in which there is full ownership. I can't just use the "fee-simple" jargon for my readers that conservation professionals use.

Some readers also pointed to my statement about limited public access and gave thoughtful explanations for why access is so restricted or limited.

That's an interesting issue that should be explored further. While I was on a journalism tour in Vermont, I heard that most easements there come with extensive public access. But readers pointed out that there some deals -- and therefore conservation -- would be lost if access is required.