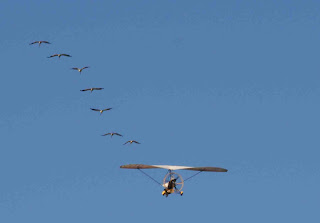 The young cranes were led to the refuge for the first time as part of an effort to re-establish an eastern flock of whooping cranes, whose numbers dropped to 15 in 1941 because of hunting and habitat loss. There are nearly 400 of the birds in the wild today, according to the Whooping Crane Eastern Partnership.

"It was terrific," said 10-year-old Diana Robertson, whose parents drove her and her sister from Tallahassee to see the fly-over. "It was exciting. It was one of the best things of my life seeing these cranes."

The 14 cranes began their 1,200-mile journey Oct. 17 from the Necedah National Wildlife Refuge in central Wisconsin. They were expected to arrive in early December but the journey was slowed by winds and bad weather.

The birds arrived in Jefferson County, east of Tallahassee, on Thursday. Their handlers were poised to take off Friday but were grounded by winds, disappointing a much smaller crowd than the one that showed up Saturday before sunrise.

The crowd, which came out on a 22-degree morning, was stretched along about a mile of the St. Marks River from the old Spanish fort to the small commercial district. But the birds didn't show up until about 8:45 a.m., as the first of three ultralight aircraft appeared above the tree line. 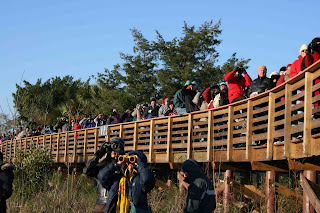 The seven birds and aircraft flew directly over the crowd at about 1,000 feet before disappearing to the west, amid applause muffled by gloved hands. The birds and planes landed in a three-acre pen in the refuge, where they'll be kept away from visitors so they can develop wild instincts.

By late February or early March, the birds are expected to return on their own to central Wisconsin. They can make the trip back on their own in less than 10 days, said Joe Duff, a pilot with Operation Migration.

The nonprofit group still is seeking about $15,000 in donations to pay for the trip, which costs about $250,000. The pilots and other team members answered questions for about 80 people who remained about 45 minutes after the birds passed over.

The only remaining whooping cranes in 1941 migrated between Canada and Texas. The Whooping Crane Eastern Partnership in 2001 established the flock migrating from Wisconsin to Chassahowitzka National Wildlife Refuge near Crystal River, Fla.

The eastern flock now contains 73 birds, Duff said. Half of the 14 new birds hatched last year went to St. Marks and the other half will be led to Chassahowtizka within the next week, weather permitting. There are now nearly 400 birds in the wild, according to the Whooping Crane Eastern Partnership.

For more on Operation MIgration or to donate to support the trip, go the group's Web site at www.operationmigration.org .

The flyover was awesome! We were so excited that they arrived on a weekend so that we were fortunate enough to see them. With tear filled eyes, we cheered as they came into view, flew overhead and continued on to the St. Marks Refuge. It was definitely a once in a lifetime experience! John and Suzanne Kane - Ochlockonee Bay, FL

Thanks for the comment! It was like a festival and the people who went really seemed to enjoy it. There was no complaining about the cold or early hour having to be there. What a nice morning. I hope others will post their comments.