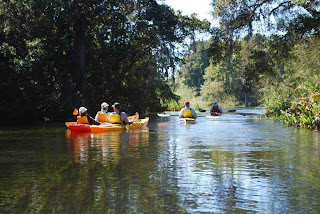 Nestlé Waters North America on Wednesday told state officials the company no longer is considering a water-pumping operation along the Wacissa River in Jefferson County.

Nestlé, a global water company which includes bottling operations near Blue Spring in Madison County and near Crystal Springs in Pasco County, said testing of Allen Spring along the Wacissa showed a lack of sufficient flow during droughts. The company had not yet filed for a permit but faced local and regional opposition to the idea of pumping.

"We have shared this data with the Suwannee River Water Management District to support their ongoing assessment of the watershed and informed them that this concludes our exploration of spring sources on the Wacissa River,” said Kent Koptiuch, Florida natural resource manager for Nestlé Waters North America.

Water bottling has raised concerns among some residents who don't like the idea of selling a public resource or worry about the effects on area wells, stream flows and aquatic life. Company officials, who also tout the jobs created by their plants, said they conducted tests along the Wacissa River to ensure there would not be environmental harm.

Georgia Ackerman, president of the Friends of Wacissa, said she doesn't doubt that the company is dropping the idea of pumping from the Wacissa River springs. But she said her group is not going away.

"Obviously the Friends of the Wacissa coalition is elated at the news," Ackerman said. "We will continue our work on springs protection issues."

In the Florida Capitol, the issue of water bottling has been lopsided in favor of the bottling companies in recent years.

The Legislature established a six-percent sales tax exemption on bottled water in 1998. Bills by Sen. Evelyn Lynn, R-Ormond Beach, to remove the exemption died in committees in 2010 and 2011.

In 2009, then-Gov. Charlie Crist proposed a surcharge on bottled water but the idea never made it into the state budget after Big Bend Democratic representatives voiced opposition.