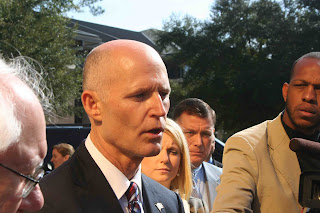 Scott told reporters after visiting DEP in February that he enjoys visiting state parks and they should be protected.


After a week of controversy involving Florida Park Service proposals to put recreational vehicle campgrounds in four state parks, Gov. Rick Scott announced last Friday he was pulling the plug on at least the proposal at Honeymoon Island State Park.

But was the timing of the governor's announcement -- after 7 p.m. on a Friday night -- a deliberate attempt to squelch publicity on the issue? No, says Amy Graham, the governor's traveling press secretary.

But don't blame an environmental reporter for at first being suspicious. The U. S. Environmental Protection Agency previously had a track record for making sneaky announcements, a strategy dubbed by some reporters the "Friday night surprise."

But first, a little background on the firestorm in Florida.

The Florida Department of Environmental Protection said in May it was considering putting new RV campgrounds in more than 50 parks that now lack camping. DEP said the campgrounds could help create jobs and encourage park visitation.

The proposal, which had created some concerns among environmentalists, became embroiled in controversy after the agency scheduled public meetings on proposed campgrounds at De Leon Springs, Fanning Springs, Honeymoon Island and Wakulla Springs state parks. More than 400 attended the Honeymoon Island proposal with hundreds more opponents unable to get in.

Then later last week, the Pinellas County legislative delegation scheduled a public hearing for this coming Thursday to discuss just that one issue. Sen. Jack Latvala, R-St. Petersburg, even established a "Save Honeymoon Island" Facebook site to organize opposition.

DEP Secretary Herschel T. Vinyard Jr. returned from vacation early to deal with the issue on Thursday. And Scott announced Friday that the Honeymoon Island proposal was being pulled and that the other proposals would receive further review.

"The only reason that announcement came out as late as it did (on Friday) is because DEP briefed the governor's office late in the day," Graham said Monday.

The U. S. Environmental Protection Agency's under President George W. Bush had a tendency to make controversial announcements late on Friday, when reporters may be less likely to cover an issue because they are out or are wrapping up other stories before the weekend.

Some environmental reporters dubbed the late announcements the "Friday night surprise." The Society of Environmental Journalists in March 2010 asked the EPA to stop the practice when possible and to try to provide advance notice to journalists. (See "SEJ Comments on How to Make EPA More Open"

Some critics of the proposed campgrounds in Florida State Parks said the process of approving appeared rushed. And they welcomed Scott's announcement, regardless of the timing on Friday.

"It appeared the people were given a chance to speak," League of Women Voters President Deirdre Macnab said Tuesday. "Their input was received and considered."

Julie Wraithmell of Audubon of Florida said she wondered about the timing but she doesn't think Scott was trying to sweep the matter under the rug.

"I guess I just wrote it off to him doing it expeditiously because so many people were alarmed by it," Wraithmell said.