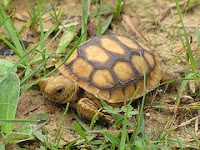 The tortoise will become a candidate for listing as threatened and endangered east of the Mississippi River including Florida. But the gopher tortoises won't be listed for protection because the agency doesn't have the money, said Cynthia Dohner, southeast regional director for the U.S. Fish and Wildlife Service.

"We never know as much as what we would like to know," Dohner said. "But we know tortoise habitat conditions are deteriorating and its habitat is more and more fragmented across the southeast."

Gopher tortoises face threats from development and lack of proper forest management including lack of prescribed fires in their upland habitat, agency officials said. In Florida, gopher tortoises are listed as threatened and developers must relocate them away from construction sites.

The decision on Tuesday to list tortoises as a federal candidate species doesn't mean there will be any additional restrictions on landowners, federal officials said.

There are more than 250 species on the candidate list that are in line ahead of the gopher tortoise for evaluation and possible listing, agency officials said. 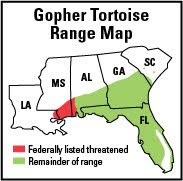 Gopher tortoises are considered a key species in upland forests because other threatened and endangered animals depend on their burrows for habitat. The tortoises can live to be over 50 years old, but do not reproduce until they are 13 to 21 years old.

Although there seems to be many gopher tortoises, the agency says the current generation is aging and not reproducing successfully because of degraded habitat. As older gopher tortoises die, they are not being replaced by young ones.

The decision to designate the gopher tortoise as a candidate for listing means landowners will be eligible for grants to improve their forest habitat.

Save Our Big Scrub and Wild South Inc. filed a petition in 2006 that led to the agency announcement on Tuesday to list the species as a candidate. Agency officials said they hoped to evaluate all species on the list within five years.

The Center for Biological Diversity submitted comments in favor of protecting the gopher tortoise and said the announcement Tuesday provided hope for its protection.

“The gopher tortoise is clearly in trouble and if it’s going to survive, it’s going to need the help that only the Endangered Species Act can provide,” Tierra Curry, a conservation biologist at the Center for Biological Diversity, said in a written statement. "We hope the U.S. Fish and Wildlife Service will prioritize funding to make sure the tortoise gets the protection it needs."

A copy of the petition and the agency register notice can be viewed at http://www.fws.gov/northflorida/ .

(Images courtesy of the U. S. Fish and Wildlife service. Story copyrighted by Bruce Ritchie and FloridaEnvironments.com. Do not copy or redistribute without permission, which can be obtained by contacting brucebritchie@gmail.com.)
Posted by Bruce Ritchie at 7/26/2011 02:51:00 PM

Great news!
Hopefully the CDD can act to protect the burrow over by Grove Park and Thoreau.