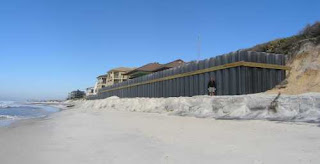 Some environmentalists are asking the Legislature to take a closer look at a local bill for Walton County that could allow sea walls to remain in place without state permits.

Following extensive beach erosion caused by Hurricane Dennis in 2005, Walton County authorized the construction of between 250 and 275 sea walls along 26 miles of beach, according to the Sea Turtle Conservancy. Sea walls can block sea turtles, which are protected by the federal Endangered Species Act, from nesting in sand dunes along beaches.

HB 1311 by Rep. Marti Coley, R-Marianna, would exempt Walton County from having to get permits from the Florida Department of Environmental Protection for those sea walls. The bill does not exclude property owners from requirements of the federal Endangered Species Act which could require additional permits, according to a House staff analysis. The bill was passed Tuesday by the House Agriculture & Natural Resources Subcommittee without discussion or debate.

Walton County officials say they're concerned that allowing the sea walls to remain would harm the character of the county's beaches and sand dunes. The county says permits should be required to determine which sea walls should remain in place.

Gary Appelson, policy director for the Sea Turtle Conservancy in Gainesville, said legislators should allow the regulatory process to work rather than giving a "free pass" to those who improperly located or constructed sea walls.

"We have long been concerned some of these walls will negatively impact the beach dune system as well as sea turtle nesting habitat," Appelson said.

Neither Coley nor Sen. Don Gaetz, R-Niceville, could be reached for comment. The Northwest Florida Daily News reported in January that the county's legislative delegation had voted to file the bill and that Gaetz had defended the measure as a "matter of simple justice."

Gaetz said Walton County commissioners are looking to use the permitting issue to create a “new revenue source” that can be collected "almost at sword's point."

“I think that the County Commission looks on these folks as a cash cow,” he said.