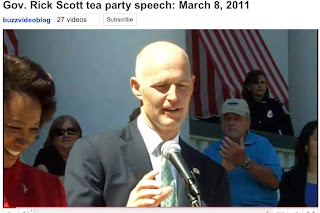 Gov. Rick Scott skipped a rally for the Florida Forever conservation land-buying program but attended a nearby "Tea Party" rally on the opening day of the legislative session.

Florida Forever was the largest land-buying program in the nation from 1990 to 2008, when funding was reduced. Scott offered no money for the program in his 2010-11 budget recommendation.

"How many events are happening around the Capitol today?" said Brian Burgess, communications director for the governor, when asked why the governor did not attend. "My point in asking is to point out that there are numerous events the governor didn't speak at today."

As for why DEP wasn't there to promote the land-buying program it now administers, spokeswoman Dee Ann Miller said: "On the opening day of session, it was decided staff resources were best utilized elsewhere."

Democratic legislators also were noticeably absent from the Florida Forever rally. Andy McLeod, director of government affairs for The Nature Conservancy's Florida chapter, pointed out that the House Democratic Caucus had rescheduled a meeting to 12:15 p.m., which was during the rally. 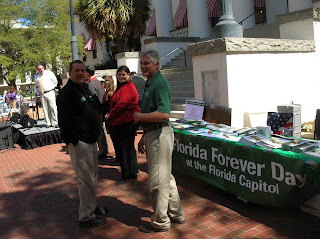 Rep. Michelle Rehwinkel Vasilinda, D-Tallahassee, was the only legislator or Cabinet member to attend. She said the land-buying was critical to maintaining tourism-related jobs.

Scott's absence on Tuesday and his budget recommendation to not fund Florida Forever represent a challenge for program supporters, McLeod said.

"It says we have work to do to make the case for the recreational and emotional importance of public lands but also critically making the economic case," McLeod said. He also said that holding the rally on the opening day of the legislative session increased its visibility but put it on conflict with other rallies and ceremonial events.

Speakers at the rally pointed to the economic and health benefits of public land ownership. The program pays for farm preservation, city parks and seafood "working waterfronts" as well as buying land for state forests, state parks and wildlife management areas.