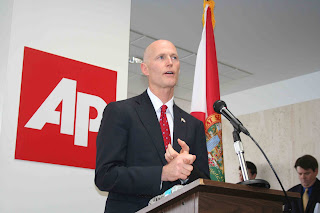 Gov. Rick Scott on Wednesday said he supports growth management but says it needs to be improved.

Scott was among several Cabinet officials and legislative leaders along with U.S. Sen. Bill Nelson, D-Fla., who spoke at the Associated Press Florida Legislative Planning Session in the Capitol. They answered questions on a wide range of topics.

"I don't have a proposal today to merge those agencies," Scott said Wednesday.

In an article published Sunday in the Ocala Star-Banner, former DCA Secretary Tom Pelham said claims by Scott and industry officials that growth management is killing jobs "do a disservice to DCA and mislead the public." He resigned prior to Gov. Charlie Crist leaving office on Jan. 4.

On Wednesday, Scott also mentioned hearing complaints about the state during a business roundtable Tuesday in Destin.

Oil drilling also was raised on Wednesday as an issue with several speakers during the AP session. Following the Gulf oil spill in April, House Speaker Dean Cannon and Senate President Mike Haridopolos said the issue of allowing drilling in state waters won't come up while they are legislative leaders.

Cannon, R-Winter Park, on Wednesday reiterated that the issue won't be heard. He spearheaded a bill amendment late in the 2009 legislative session to allow drilling in state waters.

"That's off the table during my time," Cannon said.

But Scott, while recounting his meeting with former Gov. Bob Graham last week to discuss a federal commission's report on the oil spill, said the nation still must figure out how to safely drill offshore.

"We have to continue to look at offshore drilling," Scott said. "But again, we are not going to take a risk with our environment or our economy if drilling is not safe."

Saunders, the Democratic leader, said, "If they [Republicans] try to pass oil drilling again, we will fight them."

On the issue of water, Cannon has created the House Select Committee on Water Policy but said Wednesday he did not determine what issues the panel should take on. Rep. Trudi Williams, R-Fort Myers and committee chairman, said last week the panel may examine water management districts and the state's "local sources first" policy.

"I have a lot of confidence in Rep. Trudi Williams, who is chairing that committee," Cannon said. "I'm generally going to look to her for guidance."

Agriculture Commissioner Adam Putnam, however, said that reconsidering the "local sources first" policy as a prelude to potential piping of water downstate would cause a great deal of dissension, especially among North Floridians.

Putnam said that building water pipelines would "put us on the brink of a civil war."

A lot of CORPORATE "people" complained about regulations? Who would have thought?

Remove The Chamber of Commerce from the equation and you would find very few complaints about DCA. They use big bully tactics, as used to defeat Amendment 4, to intimidate businesses, as well as employees, 'to follow their agenda'. The Chamber's motto about representing small business is the cloak hiding Big Business politics, at any cost!