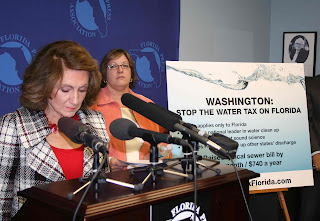 Opponents of federal water quality standards for nutrients in Florida waterways raised their level of opposition today, unveiling a Web site and two former state environmental chiefs who are on their side.

Scientists say nutrients from a variety of sources, including farms, sewage treatment plans, industrial mills and stormwater runoff are to blame for weeds and algae that choke some Florida waterways.

To settle a lawsuit filed by environmental groups, the EPA agreed in August to set numeric limits for nutrients, such as phosphorus and nitrogen, in rivers, lakes and coastal waters. Previously the state had only a narrative criteria that prohibited levels that cause an "imbalance" of plants and animals.

Agriculture Commissioner Charles H. Bronson, along with wastewater utilities and four of the state's five water management districts, already is seeking to intervene in an attempt to block the agreement. They protested the agreement last week in appearances before the House Agricultural and Natural Resources Policy Committee.

Today, business and anti-tax groups along with Colleen Castille and Virginia Wetherell, both former secretaries of the Florida Department of Environmental Protection, announced their opposition and the creation of a web site called www.DontTaxFlorida.com.

"For Colleen and myself, we find it very troubling that the federal government would inflict a particular set of strict -- and what we think are unreachable -- limits on this particular state when they are not looking at them for other states," Wetherell said.

The proposed court agreement, which will be considered for approval Monday by a federal judge, would more than double the monthly sewage treatment bill for the average household from $56 to $118, said Paul Steinbrecher, vice president of the Florida Water Environment Association's Utility Council. He also said utilities would be required to spend $50 billion to meet new federal water quality standards.

There was no immediate reply from the U.S. Environmental Protection Agency. EPA and the Florida DEP both have said that setting numeric criteria is necessary to restore waterways in the state. EPA has said last month that it had not finalized the proposed criteria so it was unknown what actions would be needed to reduce pollution.

Monica Reimer, an attorney representing the Florida Wildlife Federation, the Sierra Club and the St. Johns Riverkeeper and other environmental groups that sued the federal government, said the opposition press conference reflected "hysteria" by the industry groups and that the economic claims were "just ridiculous."

"This entire press conference was about something that doesn't exist -- it's about what the standards are that EPA will propose," said Reimer, with the nonprofit Earthjustice law firm in Tallahassee.

"If they (the standards to be proposed) are in fact arbitrary, they (opponents) can go to federal court and claim that," she said. "If they are right, a federal court will strike them."

A federal judge is scheduled to consider the proposed court agreement on Monday. If approved, the EPA would be required to propose standards in January and adopt them by October 2010.

The groups represented at the news conference today included Florida TaxWatch, Associated Industries of Florida, the Florida Alliance for Concerned Taxpayers and the Florida Chamber of Commerce. They are among 26 businesses and groups that have joined the opposition coalition. 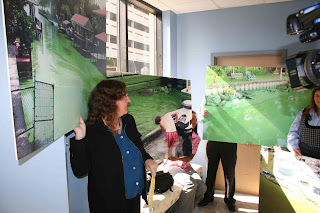 Outside the news conference at the Florida Press Center in Tallahassee, staff of Earthjustice held poster-sized photographs of algae blooms in waterways including a St. Johns River tributary.

The previous FDEP leaders, Colleen and Virginia should be ashamed since it was during their reigns that major waterway pollution amplified. Now they are showing pictures of their handiwork - blue green algae in deadened rivers! An ounce of prevention...in their reign could have saved the day. Now EPA is needed to fix their mess. We must not let this condition remain unless we want an even higher bill. Lost tourism, lost fishing and hunting, lost hotel stays, lost boating, lost wildlife watching...

Virginia and Colleen can't find any real work? What a sad legacy for both. First they looked the other way while the polluters ran the State, now they publically show their support. Yes, clean water is a real threat to our economy. Both must have been drinking a lot of koolaid made with FL spring water.

Additional notes:
Colleen Castille now is managing partner of the Go Green Strategies consulting firm. She said she does not represent any client who would be affected by the numeric nutrient standards but added that she would not be adverse to representing such a client.

Virginia Wetherell is president and CEO of Wetherell Consulting. She also serves on the board of directors of Buckeye Technologies Inc., which operates the cellulose mill in Perry, Fla. She said her appearance at the news conference was unrelated to her serving on the corporation's board.

Buckeye Florida is a member of the Florida Pulp and Paper Association, according to the association's Web site. The association has intervened in the lawsuit against EPA in opposition to setting numeric nutrient standards.

When Carol Browner comes out against it, then I'll take it seriously.

We are so overdue for meaningful nutrient limits. I do not believe the Clean Water Act allows for corporations to operate at the expense of the environment. Even under the narrative standard Florida has been out of compliance for decades. Enough already! Shame on you Coleen and Virginia!

Anonymous and mangomama are right on target.

PEER.org has been proving such observations for years.

Lack of quality and quantity of water in Florida destroys or harms so much throughout our fragile state, from human beings to fauna and flora --- everything -- as everything depends upon water.

If the problems had been dealt with decades ago, then the damage would not be as severe as now and the costs to keep Florida liveable and a tourist destination would be far less.

Unfortunately, thanks to DEP secretaries Virginia Wetherell and Colleen Castille and many others, Floridians and Florida suffers.