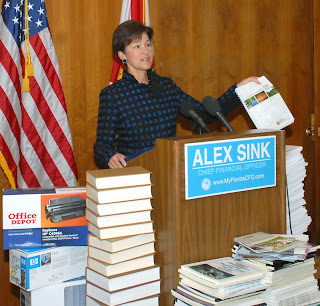 Florida CFO Alex Sink says her department's efforts to reduce the use of paper and printing have saved state taxpayers $1 million since 2007.

Sink, whose elected position places her in charge of the state Department of Financial Services, today announced a legislative proposal to require electronic payments from some vendors instead of processing paper warrants. She called it part of the "Going Green, Saving Green" initiative at her department.

"Today's focus on going paperless will save money (and) improve customer satisfaction," she said. "It will certainly help the environment and it's going to help make state government a little greener."

Sink, a Democrat who is running for governor in the 2010 election, isn't the only state official to announce efforts to reduce waste from printing.

Two Senate committees conducted meetings without paper in October. Senate President Jeff Atwater, R-Palm Beach, has set a goal of having all Senate committees hold paperless meetings by December, though paper copies of meeting materials still will be available to the public. (To see Atwater announcement, click here.)

During today's announcement, Sink focused more on the financial savings than environmental benefits of reducing printing costs and moving towards electronic financial transactions. With her podium surrounded by stacks of manuals and reports, she said the cost of processing 1.4 million paper checks each year is $4.18 each compared to 77 cents for each electronic transaction.

"The difference in cost is staggering," Sink said.

(Copyright Bruce Ritchie and FloridaEnvironments.com. Do not copy or redistribute without permission.)
Posted by Bruce Ritchie at 11/23/2009 03:23:00 PM