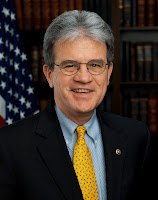 Supporters of a proposed wildlife underpass along U.S. Highway 27 north of Tallahassee received unwelcome attention in national media to their project on Tuesday when a Republican U.S. senator identified it as wasteful spending.

Sen. Tom Coburn, R-Okla., included the "Lake Jackson Ecopassage" as one the top 10 of 100 examples of wasteful spending that he had identified in the federal stimulus package. The project would include building a 4-1/2 foot retaining wall to direct wildlife to three culverts going under the road, which is on a berm built across an arm of Lake Jackson.

State transportation officials say the project is needed to prevent motorists from running over some of the 100 or more turtles, alligators and other wildlife that attempt to cross the divided four-lane highway on some days. But Coburn's report said existing efforts to protect turtles along U.S. 27 already are working pretty well.

"To borrow money that we don't have to spend on things we don't need in the name of economic stimulus when there are things we could spend it on that we do need," Coburn told ABC News.

ABC opened its report by saying, "Why did the turtle cross the road? Because $3.4 million in stimulus money had not been spent to build him a tunnel. That's about to change. " 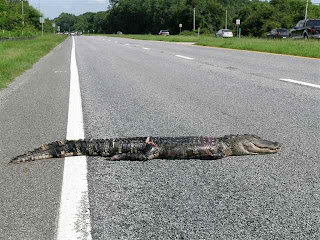 "Another thing they don't talk about is the highway built across the lake bottom four decades created the problem," Aresco said. "All we are trying to do is fix the problem for a highway that is already built."

The ABC News report and some others mentioned the safety issue, but only after highlighting the project as wasteful spending. They didn't point out that Aresco and his supporters have been working nearly 10 years to get the project built.

In that time, Aresco and supporters say they have saved more than 8,800 turtles by creating a temporary fabric fence and carrying turtles across the road. Hundreds of schoolchildren have taken up the cause of building the Lake Jackson Ecopassage and local officials have supported the project.

But Aresco said the fabric fence is only a temporary solution. The temporary device must be monitored three times a day, alligators and some wildlife still can cross over it and the fence falls down, is knocked down or is chewed up by critters trying to get across the road, Aresco said.

"They're saying the temporary fabric fence and wooden stakes that's working just fine?" Aresco said. "The minute (we) couldn't do it any more those fences would fall down and that would be the end of it."

ABC World News Tonight: "Wasteful stimulus spending with your money": Go to abcnews.go.com/wn and click on the link under "Now Playing"

Propublica: "Battle of the Stimulus, project by project"

If you go to the lakejacksonturtles.org website mentioned in the article, there is a section called Supporters where it says "Total supporters of the Lake Jackson Ecopassage, when including the membership of all supporting organizations, is now in excess of 13.4 million people." So tell me, why not ask your existing supporters to donate $1 each. The project will be paid for, and the TAXPAYERS will not have been forced to pay for something they consider wasteful. Part of the silliness of these pork projects is that "we the people" are being forced to pay for things whether we agree with them or not. If you want to do it, and you have enough support to make it happen, FINE. Why drag the rest of us into it? Have a bake sale! Put on a show in Aunt Tilly's barn! Hold a telethon, better still... a turtle-thon! Just leave the rest of us out of it.

I'm going to assume the question is directed at the Ecopassage supporters and not at me as the writer of this story. I've asked some of the supporters if they would like to respond. But I guess I do have the perspective that there is a safety issue that involves all drivers on U.S. 27, a federal highway, including those passing through on the way from Oklahoma or wherever to Disney World.

Using Federal dollars for this project is completely justified. It is a U.S. Highway that used Federal dollars to build it through the lake bottom in the 1960's that caused the problem to begin with. Therefore, it should be Federal dollars that fixes the problem, not local or private funds (or bake sales). Private funds from a donation in the amount of $370,000 have already been used to purchase the additional right-of-way that was needed.

We've done a lot of stupid things in the past, such as ignored the spread of non-native organisms, that now costs a lot of money to fix. Ah, hindsight. But fix it we should, as that lake has amazing diversity and horrendous casualties. The point of the stimulus package projects is to put people to work fixing things, so this would be a perfect fit. Remedying an environmental disaster is as good a reason as any. The Republican base would undoubtedly prefer money go to rich cronies without actually accomplishing something- they are crazy, and it's time their wholesale destruction of government ended.