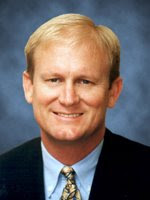 By Bruce Ritchie
The chairman of the powerful Senate Ways and Means Committee on Tuesday criticized a federal plan to set new water quality standards for nutrients in Florida within a year.

But some industry groups argue that a year may be too soon to develop scientifically-defensible standards. And Rep. JD Alexander, chairman of the budget-writing Ways and Means Committee, echoed those complaints on Tuesday during a General Government Appropriations Committee hearing on DEP's budget.

"It's going to be extremely expensive to local governments and to agriculture and to industry across the state," Alexander said, "and cost jobs in a recessionary period of time and cost dollars that people just can't pay."

Alexander, R-Winter Haven, said that setting numeric standards could be expensive for DEP. Department officials said the federal requirement resulted from a lawsuit and they thought they could do a better job of setting standards than the federal government.

Environmental groups including the Florida Wildlife Federation, the Sierra Club and the Conservancy of Southwest Florida sued EPA last year to force it to set a numeric standard. The state now has only a narrative standard saying that nutrients should not cause an ecological "imbalance" in waterways, but federal officials say the standard makes protection difficult.

The groups said the EPA in 1998 determined that the prompt establishment of numeric standards was required nationwide. Portions of the St. Johns, Caloosahatchee, and St. Lucie rivers have been covered with algae because of high nutrient levels and visitors to Wakulla and Ichetucknee springs likewise suffered rashes from toxic algae, according to the groups.

But Alexander pointed out to DEP officials that the federal lawsuit had not been decided, yet EPA moved ahead with imposing the standard on Florida but not on other states.

"If we collectively believe this is going to be the right thing to do, we should do it," Alexander said. "But it ought to be done across the board. Every water should be protected on an equal basis -- not selectively targeted."

Mimi Drew, DEP's deputy secretary for regulatory programs, responded, "I agree with you."

There was no immediate response from EPA officials. Florida officials said in January they agreed with EPA's action because they said more effort was needed to clean up waterways in the state.

Monica Reimer, an EarthJustice attorney in Tallahassee, said in an interview that she disagrees with Alexander. She said visitors to Florida won't keep coming if beaches are plagued with red tide and dead fish or if rivers and lakes turn green.

"I am really tired of the current economic crisis being used as an excuse for getting rid of every environmental safeguard passed by Congress or the state of Florida," she said.