The state's conservation land-buying program will be maintained at its present yearly level under the 2009-10 state budget proposed today by Gov. Charlie Crist.

Florida Forever and its predecessor led to the purchase or protection of nearly 2.5 million acres of state forests, parks and wildlife preserves along with urban parks. But with state revenue on the decline, the program was cut sharply last month during the Legislature's special session before the governor restored spending with a veto.

"It's a whole new world" because of the stimulus package, Crist said. 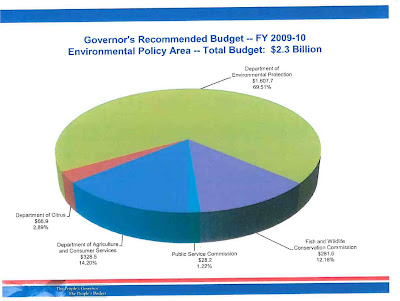 Environmentalists applauded the governor's proposal to maintain the land-buying program. But Crist's support for President Obama's economic stimulus package has put him at odds with some Republicans. Crist appears Sunday on NBC's "Meet the Press" opposite Louisiana Gov. Bobby Jindal.

Florida House Speaker Pro Tempore Larry Cretul and Senate President Jeff Atwater both welcomed the budget proposal. Cretul expressed concerns about using the federal stimulus money in the state budget, according to a Miami Herald story. And he seemed cool to the idea again today in a statement issued from his office as he cited uncertainty about the federal money along with Florida's future revenues.

"Adding federal stimulus money to the Florida economy may help Floridians during these harsh economic times," Cretul said. "However, the stimulus money cannot be seen as the only solution to balancing the state’s budget."

Some Democratic House members said Florida Forever won't survive without the use of federal stimulus dollars. Crist's office said next year's budget would need to be cut by nearly $9 billion from the 2007-08 budget if stimulus dollars aren't used.

"Florida Forever would not be funded, that's for sure," said Rep. Kelly Skidmore, D-Boca Raton. "There is no way to get through this process without the federal (economic) recovery dollars even with some revenue enhancement. The hole is just too big."

With so much emphasis in the upcoming legislative session on economic recovery, The Nature Conservancy is preparing a report on the economic benefits of the land-buying program, said Andy McLeod, director of governmental affairs for the group's Florida chapter.

"Studies show when a house faces a park or backs up on a trail it's value is notably increased," McLeod said. "So these are all some of the many ways that the economy of Florida benefits from aggressive, sound land conservation."

Other environmental features in the governor's budget include:

$55.2 million in matching funds for recycling and conservation programs

$75 million for continued restoration of the Everglades, Lake Okeechobee and the St. Lucie and Caloosahatchee rivers

$223 million from the federal stimulus package for low interest loans and grants for wastewater treatment, stormwater management and water facilities

$124.5 million in grants and incentives for renewable energy and biofuels

$14.1 million for energy efficiency projects in small cities and counties