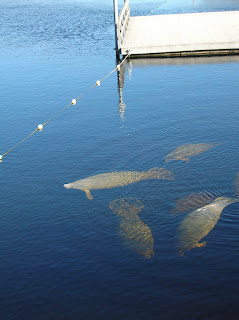 Manatees float around a swimming platform at Wakulla Springs State Park on Jan. 2

More than 100 manatees have been found dead since Jan. 1 and state wildlife officials say the extreme cold weather earlier this month was to blame for most of the deaths.

The Florida Fish and Wildlife Conservation Commission is asking anyone who sees a dead or distressed manatee to call the agency's alert hotline at 800-404-3922.

"We are deeply concerned about these impacts on manatees and other fish and wildlife," Commission Chairman Rodney Barreto said in a statement.

The recent cold temperatures, marked in North Florida by 14 days of low temperatures below freezing, also has caused agricultural losses and coral bleaching.

Of the 107 manatee carcasses found between Jan. 1 and Jan. 23, wildlife researchers say at least 77 died of cold stress. The number deaths from cold stress is expected to rise as more carcasses are recovered and examined in the weeks following the cold snap.

The January number so far already exceeds the previous record of 56 for that category in a single year, set in 2009. Many of the manatee deaths this month have been in the Indian River and other waterways in southeast Florida, though an FWC researcher said the deaths have occurred statewide.

Martine Dewit, head of FWC’s Marine Mammal Pathobiology Laboratory in St. Petersburg, said researchers will know more in the coming months whether the deaths are a threat to the survival of endangered manatees. The agency counted more than 5,000 of the sea cows during aerial surveys.

"I think it's too early to tell at this point," she said. They (manatee deaths due to cold stress) are record high numbers right now. Hopefully it is a one time occurrence."