What next for Florida's springs after bill dies?

Former state biologist Jim Stevenson said he recently asked a teenager who had grown up in Tallahassee if he'd ever been to Wakulla Springs. The teen replied that he had never heard of the state park and popular swimming spot 15 miles south of Tallahassee.

To Stevenson, who is coordinator of state working groups for Wakulla Springs and for Ichetucknee Springs near Lake City, the teen's lack of awareness represents the lack of public understanding about springs and the threats to groundwater that flows from the sparkling watery jewels. And he says that lack of understanding is a large part of the reason why an ambitious springs bill died in the recent legislative session.

"We've tried to educate the public through all kinds of means -- you name it," Stevenson said. "I guess we have just not been effective enough or not reached enough people."

With Senate Bill 274 having failed to win Senate approval last session, the future of the more than 700 springs across North and Central Florida appears greener than ever. And green isn't good when it comes to springs. 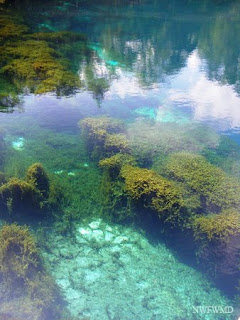 Springs have become choked with weeds and algae as nitrogen levels in groundwater have increased during the past 10 years, scientists say. Sources of nitrogen include treated sewage, septic tanks, dirty stormwater runoff, fertilizer and manure from livestock farms.

SB 274 would have established "springs protection zones" in counties with major springs. The bill also would have set limits for nitrogen flowing from property with septic tanks and required that new developments with more than one home per acre be placed on central sewer.

The Florida Home Builders Association and the Association of Community Developers opposed the bill. They said the groundwater standard would require advanced septic systems that are too expensive to install and operate.

Along with not passing the bill, the Legislature approved a 2009-10 state budget that prohibits any state agency from conducting "nitrogen-reducing" activities. That led the Florida Department of Health to suspend rule-making to require advanced septic systems in the Wekiva River basin in Central Florida.

So what should happen now with our springs in Florida?

The bill's sponsor, Sen. Lee Constantine, said he's going to keep working on the measure so that he can bring it back next year. A Republican from Altamonte Springs, he is chairman of the Senate Committe on Environmental Preservation.

"I'm still going to try to forge some kind of consensus," he said. "Nothing is going to happen on its own. We have got to come up with a comprehensive plan to protect all of our springs. I'm committed to doing it before I leave (office in 2010)."

Stevenson, a former Florida Department of Environmental Protection biologist and namesake of an award bestowed annually on an exceptional state park employee, said the key is making people aware.

"I get a little frustrated with (home builders) being assigned the black hat," Hetrick said, "when we're all trying to be part of the solution here."

The Florida Department of Health says "performance-based" septic systems cost from $3,000 to $10,000 more than standard septic tanks depending on site conditions. The tanks also cost about $30 per month for maintenance, a two-year permit and electricity to run a pump.

Meanwhile, UCF researcher Martin Wanielista is testing a new septic drainfield system that includes the use of ground up tires, sawdust and sand to reduce nitrogen and phosphorus from the wastewater being discharged, according to an Orlando Sentinel article.

The new drainfield system could add about $4,000 to the cost of a standard septic system, Wanielista told the Sentinel. He could not be reached last week by FloridaEnvironments.com.

Hetrick said the new drainfield system would allow existing septic tanks to be retrofitted to reduce nitrogen, saving homeowners the cost of replacing septic tanks and advanced systems along with the cost of electricity -- estimated at $7.65 a month by state health officials.

If the state pushes advanced septic systems, other companies won't spend the money on research for the so-called "passive" technologies that cost less. And the cost, home builders say, is what's important to helping protect springs.

"The more affordable it is the more people will buy into it," said Dale Fuller, executive officer of the Tallahassee Builders Association. "And the more functional will be the solution."