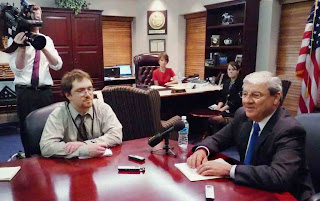 The session ended today without the governor's proposed renewable energy bill being brought up in the House nor his proposal for Florida to adopt California's automobile emissions standards.

"No I don't think it was a rejection at all of the governor's energy agenda," said Cretul, R-Ocala, noting that the Senate also got started late in developing a renewable energy bill based on Crist's call for more renewable energy.

"One of the good things about this, we -- the House -- can come into a little clearer focus on what exactly we would like to roll out in the energy area next year," Cretul told reporters. "It will only be September when we start our (committee) meetings back up."

The House did adopt a bill to allow drilling for oil and natural gas in Florida waters as close as three miles to the shoreline, but it wasn't taken up by the Senate. The proposal, unveiled 50 days into the 60 day session, faced opposition from environmental groups and most Democrats.

Cretul said he wasn't sure oil drilling or anything else would be part of an energy bill next year, but he added that he has always been an advocate of reducing the nation's dependency on foreign oil.

But when pressed by a reporter on whether he'd support oil rigs that could be seen from the shoreline, Cretul balked.

"That could offend some people and it might offend me," Cretul said. "Again going back to what the distance is from the beach to the site -- I don't know that we got that deep into the discussion. We brought it up and started discussing it."

Actually, the issue was brought up during House floor debate on the oil drilling bill. Supporters of drilling said ships could load oil from undersea pumps that wouldn't be visible from the surface.

Also during the session, Crist proposed $300 million for the Florida Forever land-buying program. But the House refused to provide new money even after the Senate proposed cutting it to $50 million.

Florida has purchased 2.4 million acres since 1990 under Florida Forever and a predecessor program.

"I don't know if there is anything wrong with just taking a breath and taking a break," Cretul said. "Especially in these times when people are strapped right now, to go back and say we're going to buy land, take it off the tax rolls ... I would suspect the majority of taxpayers would understand that."