Whooping cranes being led to Florida for second flock 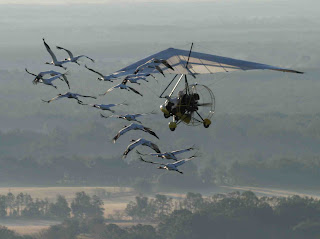 
By Bruce Ritchie
One of the most impressive bird species in the world is expected to arrive this month in North Florida after being led by handlers in ultralight aircraft on a 1,200-mile journey from Wisconsin.

Whooping cranes, which stand nearly five feet tall with a wing span of 7-1/2 feet, were nearly extinct by 1941 when there were only 16 in the wild. But they're making a comeback with the help of a reintroduction program that involves raising the birds as hatchlings and leading them to Florida with ultralight aircraft to establish their new migration patterns.

For the first time, some birds will be led to the St. Marks National Wildlife Refuge, located 20 miles south of Tallahassee, where they will be kept in a pen away from public viewing during their first winter here. But before they land at the refuge, their handlers hope to fly them over the town of St. Marks for a public viewing.

"We are eagerly awaiting this event," said Wakulla County resident Lynn Reynolds, a board member of the Apalachee Audubon Society.

"Even the picture is impressive with this flying tricycle up in the air with a bunch of birds trailing it," said Ben Fusaro, the Apalachee Audubon Society president. "Even if they were geese, it would be impressive."

Fourteen whooping cranes were being led across Alabama this week after they and the four ultralight aircraft began their journey on Oct. 17 from Necedah National Wildlife Refuge in central Wisconsin. The birds had been expected to arrive in St. Marks in mid-December but the journey has been slowed by winds and bad weather.

The flock will travel together to Jefferson County, northeast of Tallahassee, where it will be separated into two groups. Six to eight cranes will be led to the St. Marks refuge and the rest will go on to Chassahowitzka National Wildlife Refuge near Crystal River, St. Marks Refuge Manager Terry Peacock said.

Operation Migration, a Canadian non-profit group, led a new flock of young whooping cranes to Florida each year beginning in 2001 with all of the birds going to Chassahowitzka. Previously the only flock of migrating cranes was in Texas.

The Florida birds have returned to the north on their own and maintain the annual migration pattern without human guidance.

In 2007, 17 newly-arrived birds at Chassahowitzka drowned in their pens after apparently being stunned by a lightning strike. That tragedy led the Whooping Crane Eastern Partnership to pick the St. Marks refuge as a second home for the birds, Peacock said.

The cranes' arrival this month will mark the end of a process of raising the young birds and preparing them for the journey.

Eggs from whooping crane nests in the wild are hatched in incubators with the sound of the ultralight aircraft to associate them with the noise. Biologists take one of the two nest eggs because typically only one chick usually survives because of competition in the nest for food, Peacock said. 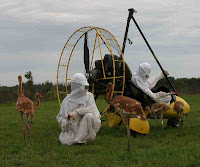 
The chicks are raised by humans wearing suits that resemble whooping cranes. Feeding machines encourage the birds to walk, and the ultralight aircraft are operated nearby so that the birds don't fear them.

The trip south is arduous, with the birds and pilots flying in sub-freezing temperatures and hampered by lengthy delays caused by snow and other foul weather. Some birds can be reluctant to take flight with the ultralight aircraft or stop off on their own, so they have to be "rounded up" by the circling aircraft.

There are more than 30 stop-over locations with nighttime holding pens along the journey, many of them on the private tracts of sympathetic landowners. There are four ultralight aircraft, a spotter airplane and several support vehicles tracking the migration.

"This is the wildlife equivalent of putting a man on the Moon," John Christian of the U.S. Fish and Wildlife Service said for a video produced by Operation Migration.

St. Marks refuge managers hope that once the birds arrive, they will stay in a three-acre fenced area where they will feed on periwinkle snails and fiddler crabs. The fence, built by refuge staff and more than 100 volunteers, will protect the birds from predators.

The fenced area also is off limits to people. Wildlife officials say the birds should avoid human contact during the first year for their own safety and to develop wild behavior.

Wakulla County can become a part of history by helping with the recovery of the species, Peacock said. Already, schoolchildren in Tallahassee are donating spare change toward installing a camera at the pen site to broadcast video on a Web site.

"We're trying to get the community to have buy-in," Peacock said. "Ownership (in the program) is how we get conservation of the cranes."

Keep up with the progress of the cranes at www.operationmigration.org.

“So far, only two of our seven flyway states have had all their air miles sponsored," Liz Condie, Operation Migration’s director of fund development, said in a news release. “Wisconsin and Georgia are each fully sponsored,” she said. “But we still have 61 miles not covered in Illinois; 24 in Kentucky; 37 in Tennessee; 123 in Alabama; and 41 miles in Florida.”

"Despite the tough economic times, we are hopeful that the many folks along our new, more westerly migration route will become supporters and come to our rescue," Condie said. “Not only is the Whooping crane reintroduction a compelling success story, the outcome of our work is a wildlife legacy to future generations."

To learn more about the group's sponsorship program, go on the Web to:

Very interesting. I was aware of this program but did not realize that many of them ended up in Florida. I would like to include information about this in my next book. I'm working on number four in the series.

I write about fish and wildlife and the absurdities of life. If you have an interest in humor and mysteries, you may enjoy my book. Please take a look.