Red tide research could be cut by Legislature 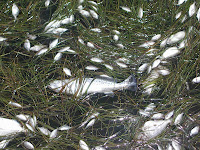 Florida's fight against the microscopic menace of its beaches and coastal waters could be dealt a blow by spending cuts being considered by the Legislature, marine researchers say.

House and Senate committees this week recommended cutting spending for research into "red tide," a toxic microorganism that causes fish kills, contaminates shellfish and can cause respiratory problems for people. Scientists say the money is used to monitor red tide and predict where it will occur.

The Legislature is holding a special session to address a $2.3 billion revenue shortfall in the 2008-09 state budget and was considering deep cuts to social services and higher education. This week in the Senate, the General Government Appropriations Committee recommended cutting $475,000 for red tide monitoring and research, a move that scientists said poses a setback for the recently increased research.

"We are hoping they won't cut, especially with the economic impact implications that red tide has," said Kumar Mahadevan, president of Mote Marine Laboratory in Sarasota. "We don't want to succumb back again to saying we don't know (what's happening with red tide). We want to try to find out."

But Sen. Carey Baker, R-Eustis and chairman of the Senate committee, said the Legislature is trying to maintain the program by not cutting it even more.

"Frankly the whole program was on the chopping block," Baker said. "We were able to save enough to at least keep it going."

Red tide is an algae that contains a toxin that can form offshore. Scientists are trying to determine the roles nutrients and other factors in the water and air play in creating red tide blooms.

The Florida Fish and Wildlife Conservation Commission this year received $5.1 million from the Legislature to study red tide and other harmful algal blooms. Mote Marine receives $1.5 million from the FWC to assist in monitoring and research.

Although no red tide has been detected this month, it has caused widespread beach closures in Southwest Florida and led to the closure of Apalachicola Bay for oyster harvesting for weeks in 2003 and 2005. Red tide killed 96 manatees in 2003 and 107 dolphins in 2004.

The state money has been used to create computer models to predict how red tide outbreaks can grow and how it can expand to other areas as it did in 2005 when winds blew it from Southwest Florida into the Panhandle, said Cynthia Heil, senior research scientist with the FWC's Fish and Wildlife Research Institute in St. Petersburg.

She said her agency hasn't determined where in the red tide program it will take the money from if the Legislature approves the cuts. But she said she is sure the cuts will cause harm.

"It could significantly impact our ability to monitor for red tides and all of the improvements gained in the last few years and knowledge (acquired)," she said.

Sen. Al Lawson, D-Tallahassee, noted that it was the Florida Fish and Wildlife Conservation Commission that identified red tide research for possible cuts. Heil said red tide was identified as an alternative to across-the-board spending cuts for other programs.

Lawson also said he's concerned about cutting the program because red tide research remains critical to protecting Apalachicola Bay, where 95 percent of the state's oysters are harvested. The bay has a $134-million direct economic impact from seafood and recreation, according to the Florida Department of Environmental Protection.

"Eliminating that (red tide research) would cause tremendous harm to the fishing industry," Lawson said. "We are going to try to get that restored."

Baker said everyone is having to experience painful cuts because the economic downturn has reduced tax revenues being collected by the state.

"Its still important -- it is vitally important," Baker said of the red tide research. "That is why we worked so hard to continue to fund them as we did. Every worthwhile program that we have is receiving cuts."