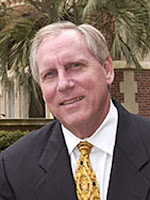 Florida State University President T. K. Wetherell said a grand jury might not be investigating a proposed biomass plant on FSU property if the state attorney had requested information from the university.

State Attorney Willie Meggs says a grand jury this week directed him to look further into the deal in which Biomass Gas & Electric of Norcross, Ga., proposed building the plant on 21 acres of FSU land in southwest Tallahassee. Wood and plant material would be heated to create gas that is burned to produce electricity, which would be sold to city of Tallahassee utility customers.

Wetherell's wife, Virginia, said last year she was a partner in the company. But she said there wasn't a conflict of interest because the governor and Cabinet, not FSU officials, approved a lease on the property in 2006.

Asked about the potential conflict of interest, T.K. Wetherell on Tuesday said, "It doesn't have anything to do with that. I can't talk to you about it. You got all you are going to get. You will have to go to the lawyers."

He did say at first that FSU will provide all the information that Meggs wants.

"I wish they had asked for it on the front end, but they didn't," Wetherell said.

And asked what difference that would have made, he said, "Well, I don't think they'd be looking into it."

Company officials said the project, with a $150 million investment, would provide clean energy and "green" jobs for Tallahassee. The site, company officials have said, was ideal because it is surrounded by railroad tracks to deliver the wood fuel and is near an electrical substation.

The proposal raised concerns about noise, odor and pollution from some area residents and the Council of Neighborhood Associations in Tallahassee. The local NAACP branch asked Gov. Charlie Crist and Attorney General Bill McCollum to investigate the deal including the possible conflict of interest with the Wetherells.

An NAACP attorney said the group still wants an investigation. Meggs said today the company's decision last week to relocate the plant wasn't a factor in the grand jury's decision to proceed.

Responding to Wetherell's statement that he should have first asked for information from the university, Meggs said his motivation also would have been questioned if he'd launched the investigation himself rather than leaving it for the grand jury to decide.

"It won't be me (investigating), it will be a group of citizens who gets the answer," he said. "I don't know if I follow the logic of why didn't I ask for it (information from the university). Ask for what?"

BG&E on Monday announced it would not build in Leon County and said it was withdrawing the project from FSU's master plan, with a company official criticizing Leon County Commissioner Bill Proctor and opponent Erwin Jackson for fueling controversy over the proposal.