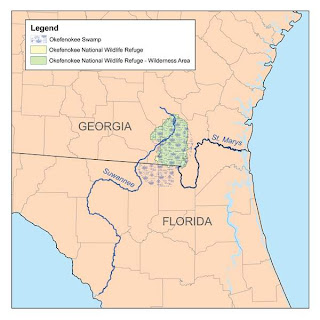 Environmental groups are asking federal wildlife officials to reintroduce panthers into North Florida and South Georgia to help save the endangered species.

Panthers once ranged across the southeast but are now limited to South Florida, where there are fewer than 130 living in the wild. Threats to their survival habitat loss, highways, lack of genetic diversity and human population growth.

The Florida Fish and Wildlife Conservation Commission introduced western cougars into the Okefenokee in the 1990s and recaptured them at the end of the study. Biologists said the area could support panthers but there were protests from some Columbia County residents who said they feared predator's reintroduction.

Environmental groups, including the Center for Biological Diversity, said Thursday that scientists have identified the Greater Okefenokee Swamp ecosystem in South Georgia and North Florida, with an abundance of deer and feral hogs for prey, and a top prospect for reintroduction. Panthers also would aid regeneration of the region’s diminished longleaf pine forests by preying on feral hogs that eat pine saplings and seed cones.

“For the Florida panther to have any chance at long-term survival it needs more than one population in South Florida,” said Michael Robinson of the Center for Biological Diversity, the primary author of the petition. “Reintroduction of Florida panthers will aid their recovery and help restore the natural balance in some of the ecosystems in which panthers lived for thousands of years.”

A U. S. Fish and Wildlife Service spokesman said the Florida Panther Recovery Plan recommends exploring the potential for reintroducing panthers into parts of their historic range but suggests no timetable. The government would have to work with states and the public to determine if reintroduction makes sense, said Ken Warren a public affairs officer in Vero Beach.

Stephen L. Williams of White Springs, president of the Florida Panther Society, said a "limited number of small vocal interests" have prevented reintroduction in North Florida and that surveys show must people support the move.

"I'm saying people in their hearts would like to see this animal survive," Williams said. "There is good scientific reason that it must be done."