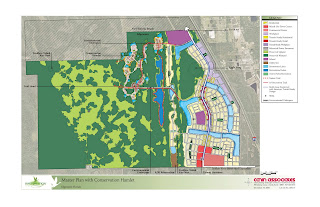 Two months after outgoing Department of Community Affairs Secretary Tom Pelham determined that a 5,000-acre land use change in Volusia County was illegal, the DCA won Cabinet approval Tuesday for the development.

Gov. Rick Scott and the Cabinet approved an order for the proposed "Restoration" development on 5,187 acres in Edgewater west of Interstate 95.

An attorney representing a development opponent said DCA had improperly reversed its position under a new department chief and Scott, who has proposed eliminating the agency. But development supporters says DCA was moving back to its original position, which they said was reversed by Pelham in December.

New DCA Secretary Billy Buzzett told the Cabinet on Tuesday that the "incredible plan" deserved approval because it would set aside 75 percent of the property for conservation.

"I think the merits of this case are pretty amazing," Buzzett told the Cabinet. "I think this is the type of planning we need to see a lot more of in Florida."

Edgewater created a new land-use category for the Restoration property that would allow up to 8,500 housing units and up to 3.3 million square feet of commercial and office space.

Critics, including the Edgewater Citizens Alliance for Responsible Development, say the development represents urban sprawl and that it would be located far from existing urban services. But a representative of Audubon of Florida told the Cabinet that the proposal was a model for Florida development.

DCA had recommended that the development be found in compliance with state growth management laws and rules after initially objecting. In July, Administrative Law Judge Bram Canter agreed and recommended approval.

On Dec. 22, Pelham issued a final order reversing Canter's recommended order. Pelham agreed with petitioner Richard A. Burgess on that there were conflicting planning time frames in the land-use amendment and local comprehensive plan.

But last week, a DCA attorney filed a draft final order for the Cabinet that upheld the administrative law judge's ruling and found the land use change in compliance.

Attorney Ross Stafford Burnaman, representing opponent Burgess, said DCA's reversal effort before the Cabinet was a "gross procedural error" with no legal authority. Burnaman predicted the Cabinet's decision would be reversed on appeal.

"It's not fair for the department to flip-flop at the last minute without any opportunity for Mister Burgess or myself to make our case to the new agency head," Burnaman said.