With 'static kill' working, feds report half of oil is gone 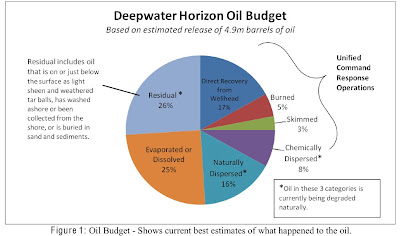 BP and the Coast Guard on Wednesday took another big step towards permanently sealing an oil well that gushed into the Gulf of Mexico from April 20 to July 15.

Meanwhile, a federal science team issued a report suggesting that about one-fourth of the 205 million gallons that leaked from the well had been collected or burned while another fourth had naturally evaporated or been absorbed.

BP and the Coast Guard said a "static kill" operation that was begun on Tuesday revealed that pumping mud into the capped well had eliminated pressure from the oil reservoir.

"Ding dong, the witch is dead," Florida emergency management director David Halstead said to applause during a morning briefing at the state Emergency Operations Center. "The well is killed. It's done. It's not coming back."

Actually, he acknowledged that BP and Coast Guard officials said the well would not be killed until relief wells are completed later this month. Halstead also staffing at the EOC may be reduced this weekend and that the emergency declaration could be revised soon to include only Panhandle counties.

The federal scientific team estimated that 25 percent of the 205 million gallons of oil spilled was collected by burning, skimming or direct pumping from the gushing wellhead. Another quarter naturally evaporated or dissolved.

Twenty-four percent has been converted into microscopic droplets either naturally or as a result of using chemical dispersants. Another 26 percent is on or below the Gulf surface as light sheen, has been washed up on shore and has been collected or has been buried in sediments, the report said.

The miscroscopic droplets of oil are undergoing "rapid degradation," NOAA Administrator Jane Lubchenco told reporters at the White House. She also said research vessels are trying to determine the locations of the oil. "We will be following the impacts of oil in the Gulf for years if not for decades," she said.