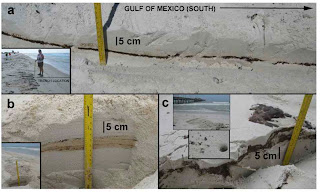 A University of South Florida study on Thursday described the cleanup of oiled beaches on the Florida Panhandle and Alabama as "superficial" because oil remains buried within sand.

The BP oil well in the Gulf of Mexico pushed mats of oil onto Escambia beaches in early July and scattered reports of tar balls continue. On Thursday, BP announced it had completed pouring cement into the well, which has been temporarily capped since July 15.

With less oil in the water, state officials announced Thursday they are going from full activation of the state Emergency Operations Center to partial activation.

USF researchers have been studying the beach cleanup since tar balls began washing ashore in Florida in early June. Researchers found that oil remained beneath the surface layer of sand even on those beaches that had been cleaned. They also found ground up pieces of hardened oil on some of those beaches.

Unless further cleanup is conducted, it may take years for the beaches to return to their former pristine conditions, USF beach geologist Ping Wang said. "What is really their goal to clean up?" he said. "They can't tell us their goal is to clean the beach up to pristine. If that is their goal they failed miserably."

BP and federal agencies now are developing a plan for returning to those beaches for a deeper cleaning, which could include washing sand to remove oil, said Christine Beekman, lead public information officer at the BP-federal Joint Information Center in Mobile, Ala.

"In this case only superficially clean is not necessarily a bad thing," she said. "There were private landowners as well as federal land agencies that needed that quick cleanup of the surface." A BP spokeswoman said the company is committed to cleaning up the beaches.