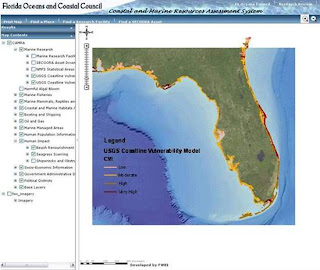 States, industries and scientists should work together to plan for the management and use of natural resources in oceans, panelists at a Florida Oceans Day workshop said Wednesday.

A proposal to allow oil drilling in state waters in the Gulf of Mexico is being crafted by the House Select Policy Council on Strategic & Economic Planning despite opposition from environmentalists and some coastal cities and counties. The workshop panelists touched on drilling as part of a discussion of "marine spatial planning."

That's a planning process that integrates mapping and data collection of coral reefs, fisheries and other natural resources and uses them in conjunction with planning for commercial and recreational fishing, the location of wind energy farms, oil drilling, fishing and other uses, said Charles Ehler, a Paris-based consultant to UNESCO.

Management of conflicting uses requires state-of-the-art tools to visualize the interactions among human activities and the ecosystem, according to the Florida Oceans and Coastal Council. The Council has sponsored the development of a prototype called the the Coastal and Marine Resource Assessment (CAMRA) System.

Janet Bowman of The Nature Conservancy said competition for use of Gulf waters is an important issue but legislators seem uninterested in planning because of its cost. Ehler said such a planning effort could cost countries up to $4 million a year, which University of Miami researcher Peter Ortner described as "chump change" compared to the costs of poor planning.

David Mica, executive director of the Florida Petroleum Council, said the oil industry already faces numerous permitting processes. "If it is meant to bring those together for greater efficiencies, then it is definitely something that is timely," he said.

As part of the Oceans Day observance at the Capitol, the House voted 112-0 to adopt HR 9013 recognizing Mote Marine Laboratory in Sarasota for its 55th anniversary.