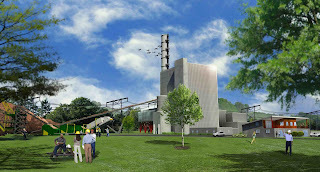 An artist's rendering of the planned Adage LLC plant in Hamilton County, which received a state air permit in January.

As biomass energy supporters complain of opposition to some biomass projects around the state, a company that was proposing to build two in north Florida withdrew its permit application for one in Gadsden County.

Biomass power, which converts wood, crops or waste to energy, is expected to be a key component in Florida's renewable energy future. Although it has support from Gov. Charlie Crist and some environmental groups, biomass is experiencing some growing pains. Some proposed plants face opposition from communities and questions have been raised about the availability of wood supply.

Agriculture Commissioner Charles H. Bronson said last week the state should push to produce enough biomass from crops and forests. And he took a swipe at some opponents.

"There are people who were all behind us on this alternative fuel thing until they realized how serious we were going to get in looking at every opportunity," Bronson told legislators. "Now they are more afraid of taking a down a tree that we can replant at any one time and grow it right back again than they are in finding new ways to create fuel and energy sources. That's being pretty short-minded in my opinion."

In response, Gadsden County biomass opponent James E. Maloy Jr. said, "The citizens of the State of Florida are not interested in mechanizing and industrializing our forests and natural ecosystems in order to create energy and huge profits for corporations at the expense of the taxpayers who are already burdened with an unmanageable federal debt. Similarly the idea of achieving the State's 75-percent recycling goal, which allows for the incineration of garbage and other hazardous fuels as a method of reaching that goal, best describes the notion of being 'short-minded.' "

My second grader knows more about the science of ecology than Mr. Bronson. Trees absorb carbon monoxide. Burning trees makes carbon monoxide. Cutting them down to burn them is a lose-lose. They don't grow back overnight. Show me a forest that can regenerate at a rate of 100 tons an hour (the amount the Gretna plant was to burn), and I'll agree that it's a sustainable technology.

Turning north Florida and south Georgia into a giant hideous monoculture of planted pines to feed into an incinerator is an absurdly archaic method of energy production.

The residents of Gadsden County were not as "dumb" as their elected officials assummed they were. They rose to fight the BioMass plant for #1 Health + well being of their residents. Bronson could use a little extra knowledge of Facts vs Fiction, before he sells this state into becoming a state based on un-proven industry, vs tourism.

To "anonymous": I think you intended to say that trees absorb carbon dioxide, rather than carbon monoxide.

You state "Show me a forest that can regenerate at a rate of 100 tons an hour". 100 tons/hour=876,000 tons per year. At a conservative growth rate of 4 green tons/year, that would require 219,000 acres, i.e. 1% of the 16.5 million acres of forest land in Florida (http://www.fl-dof.com/training_education/ed_forest_facts.html). You might want to look at some science-based bioenergy information: http://interfacesouth.org/woodybiomass/