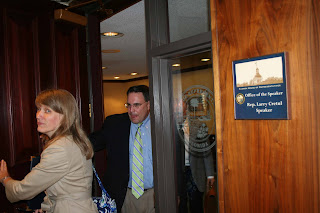 Environmentalists today met with House Speaker Larry Cretul to urge his support for Florida's conservation land-buying program, but the issue of using oil drilling revenue to buy land was not discussed.

Supporters of offshore oil drilling in the Legislature continue to promote the idea of using oil revenue to pay for the land-buying program, which has been the largest in the nation. The Legislature earlier this year declined to borrow $300 million for the Florida Forever program for the first time since 1990.

"We had a good broad discussion about the merits of Florida Forever," said Andrew McLeod, director of government affairs for The Nature Conservancy's Florida chapter. Former Rep. David Flagg of Gainesville also attended as a Florida Forever supporter.

Also today, Gov. Charlie Crist said energy also could be the subject of a possible special legislative session in October to ratify an agreement with the Seminole tribe to provide gambling revenue to the state.

Asked when energy means oil drilling, Crist responded "possibly," adding that he may want to see it on the agenda too. He also said that it could depend on whether a drilling bill is filed by legislators.

A bill in May that would have opened Florida waters to drilling within three miles of the coast passed the House but died in the Senate after Crist raised concerns at that time about the close proximity of drilling. That bill would have provided a portion of state revenue paid for by oil production to conservation land-buying, a proposal that environmental groups rejected along with the bill.

The possibility of using oil revenue for Florida Forever was not discussed during today's meeting with Cretul, Flagg said.

"This is our first meeting," Flagg said. "We want to get started as noncontroversial as possible."

During budget talks in May, the Senate offered to provide $50 million for Florida Forever but the House refused. Cretul, R-Ocala, said after the legislative session that he didn't think there was anything wrong with taking a break from land-buying.

But Cretul today expressed a willingness to look for money for the program in 2010 -- tempered with realism about the economy and declining revenue collections, said Todd Reid, staff director in the House Majority Office.

"The speaker said, 'We're optimistic but we're also realistic. We are facing a lot of challenges,' " Reid said.

Group representatives revealed during the meeting with Cretul that former governors Reubin Askew, Bob Graham, Bob Martinez and Jeb Bush are serving as honorary co-chairmen of the Florida Forever Coalition.

Flagg, a member of the Suwannee River Water Management District board, said the district uses the land-buying program for purchases to protect water quality.

Anyone who does not support the lands program needs to live with a contaminated well. In Hernando County we have 35 square miles of water contaminated with arsenic.The citizens of Florida deserve potable water. We must have water to survive. We don't need oil. Just because Christ is making a bid for the White House does not mean he should abandon the citizen of Florida for the big oil companies. I for one have a very long memory and a big mouth. I will remember! The Lands program works and needs to continue.

OK, I guess I need to figure out how to edit comments. Because I'm sure flcitizen meant to say that Crist is making a bid for the White House and not Jesus Christ. That's a common spell-check error that has made into newspaper headlines around the state.