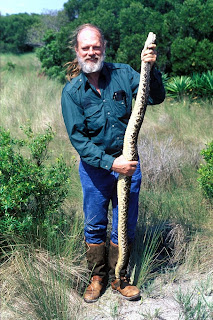 Northwest Florida is a biological hotspot because it stands in the crossroads of different ecological areas and because of the Apalachicola River, Ecologist Bruce Means told a packed auditorium last week.

Means, president and executive director of the Coastal Plains Institute and an adjunct professor at Florida State University, was honored by the Tallahassee Scientific Society for his more than 40 years of research and work to conserve biodiversity in the Florida Panhandle.

He told the audience at the state's R.A. Gray Building that the region is one of six biological "hotspots" in the United States because of the high number of plant and animal species. Means, who has a doctorate in ecology from FSU, received the Tallahassee Scientific Society's annual gold medal for 2009.

The region has more than 2,100 native plant species, six of the world's 10 families of salamanders and the highest number of turtle species found anywhere in the nation, Means said.

Drying ponds that are less than one-tenth of an acre in size can contain up to 27 species of amphibians. The region's southern temperate hardwood forests contain 35 species of trees, the most of any forest type in the United States and Canada.

The Panhandle has high biodiversity for several reasons, including its warm climate. But the most important reasons are that it lies between the Florida peninsula and continental North America and because the Apalachicola River drains the southern Appalachian mountains.

The Apalachicola River is Florida's largest river and has allowed species to migrate from the mountains to North Florida, Means said.

"It has been a highway of dispersal for thousands of years," he said, "for plants and animals to migrate through deeply incised valleys and gullies along the river system down into Florida during glacial periods, then back up north during the interglacial periods like we have now -- but leaving outliers here like in the ravines especially along the Apalachicola River."

Joseph Travis, dean of FSU's College of Arts and Sciences and the Robert O. Lawton professor of biological sciences, introduced Means to the audience, recalling how Means did most of the work on a research paper that they co-authored soon after Travis arrived in Tallahassee.

"He's an invaluable resource for all of us. And he shares his knowledge and gives of his time without hesitation. I can think of no stronger praise than to say I wish I were like Bruce. I really do."

Means is author of "Stalking the Plumed Serpent" and co-author of "Priceless Florida" and "Florida Magnificent Wilderness" among other works.