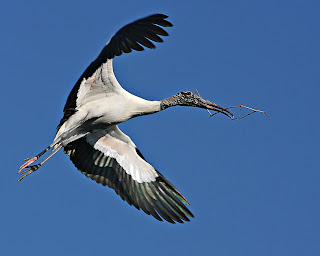 The U.S. Fish and Wildlife Service says it will review the "endangered" status of wood storks because of a petition filed by the Florida Home Builders Association.

FHBA says the storks' 26-year-old classification is outdated, but an Audubon of Florida representative says the 12-month review raises concerns and that the future of the species should be closely studied.

Wood storks, which have black and white feathers and black scaly skin on their unfeathered heads, can reach a height of nearly four feet tall. They feed on fish in drying wetlands and build their nests in colonies with other wood storks in trees surrounded by water. They use the same colonies for years unless there are disturbances.

The Florida Home Builders Association requested the review in a 2009 petition. FHBA says restrictions on development, permitting and land and water use to protect wood storks are based on the bird's "outdated" classification as endangered since 1984.

Changes in South Florida water flow led to declines in wood stork populations from 15,000 to 20,000 breeding pairs during the 1930s to a low of 4,500 to 5,700 from 1977 to 1980. The birds appear to have adapted to habitat changes in South Florida by expanding their range into Georgia, North Carolina and South Carolina. A recovery plan for the species calls for 6,000 nesting pairs, an objective that was exceeded from 2001 to 2006, the Fish and Wildlife Service said.

"Until we get universal recognition this species is improved and has improved, we are not going to see any cutbacks in land regulations," Hopper said.

Species should not be listed if they have healthy populations, said Julie Wraithmell, wildlife policy coordinator for Audubon of Florida. But she said the fate of the birds remains uncertain in South Florida, where water problems remain, and in their new range into the Carolinas.

"We are going to have to look closely at the criteria for down-listing," she said. For more information on the review process, click here.