Oil sticks around beaches after the clean-up crews leave 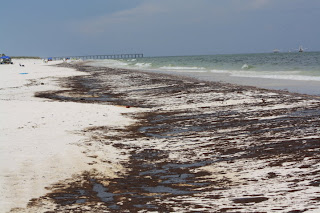 The state was expected to mobilize heavy equipment Thursday to clean up the beaches. But research by the University of South Florida suggests that such efforts can't clean up all of the oil. Only tar balls had washed ashore in northwest Florida prior to Wednesday when oil "mousse" washed ashore at Pensacola Beach. More could wash ashore there along with more tar balls east into Walton County, Sole told state emergency workers on Thursday.

"We need to get out there aggressively addressing it," Sole said. "It's been a big couple of days. Sadly I expect a couple more."

Sole has stated that he wants no visible oil in the environment, Michael Barnett, bureau chief of DEP's Bureau of Beaches and Coastal Systems, told the Florida Coastal and Ocean Coalition Conference in Tallahassee last week. "I don't know how that will play out," Barnett said. "I don't know if Mike (Sole) does either." 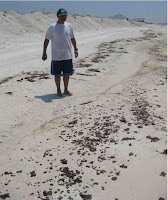 USF geologist Ping Wang found that oil still lingers on beaches even after it appears to have been removed by cleanup workers, according to a university news release. Wang was spending Thursday at Pensacola Beach collecting samples and documenting oil contamination.

Earlier this month, he visited the beach after tar balls were removed. His research team found small tar balls on the surface and larger tar balls buried by sand. "When the massive landfall happens, it won't be so easy to clean up," he said. 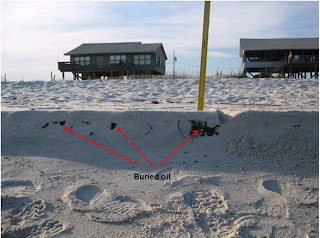 Wang's report can be downloaded by clicking here.

Advisories against swimming remained at some beaches in Escambia and Walton counties. See advisories listed at http://www.myfloridaeh.com/BEACHnames.html.

(Pensacola Beach photo by Regina Hare. Story provided by The Florida Tribune. Story copyrighted by Bruce Ritchie and FloridaEnvironments.com. Do not copy or redistribute without permission, which can be obtained by contacting brucebritchie@gmail.com.)
Posted by Bruce Ritchie at 6/24/2010 09:00:00 PM

Were having a picnic out at daytona beach, under the mainstreet pier from 9am to 9pm July 3rd. it would be great for you to join us. we will be talking about the oil spill and discuss the best course of action and if we can all get together well discuss a petition to send to the oil companies and get them to stop killing our wildlife. President Obama made a comment on a special report, he stated that we as a people need to come together and fix this. i know what your thinking (we didnt cause this oil spill) but im sorry to say anyone who thinks that is wrong. think about this, do you wear deoderant? do a drive a car? dont you wash your dishes with dishwashing liquid? all the things that i just mentioned run off or are made from oil. everytime you buy something that comes in plastic guess what you just paid a fraction of your money to the oil company. you know what the president is right we DO!!! WE NEED to come together and do whats right, whats going to save our planet. because yall this is our only one. if your not willing to do it for yourselves than lets do it for our children, our families, the people that we love. im pretty sure that we all know how the rain cycle works. when the water evaporates so will the oil and i personally dont want to dance in falling oil. when that happens its going to make all our food bad. it will contaminate the crops, damage the soil, kill our livestock which in turn if eaten will kill us. it will contaminate our water supply and last but not least cut off our air supply. i dont know about you but i dont want to be flopping around like a fish out of water. the air pollution will make a lot of people sick and i know a lot of children with health problems already. dont you think that we owe it to them to make this world a good place for them. just by attending you can make a huge difference. come on everyone lets raise our voices, come together and help fix this problem and save our earth because like i said its the only earth we have now lets preserve it not destroy it