The Florida Department of Environmental Protection today delayed action on proposed stricter rules over the land disposal of sewage sludge after one disposal company said the changes could cost it more than $1,000 per day. 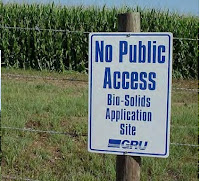 But DEP officials asked for a delay after attorney Al Ford, representing Shelley's Environmental Systems in Mount Dora, submitted a letter saying the department is required by state law to study other alternatives.

The proposed rules include requiring permits, nutrient management plans and testing for some forms of sewage sludge while maintaining an exemption for those that are dried, processed into pellets and sold as fertilizer.

Ford said Shelley's Environmental Systems' disposal of biosolids on farm fields is beneficial recycling and that agricultural-use guidelines should apply instead of DEP regulations.

"If we start putting these restrictions and regulations on them (farmers), it's not going to happen," Ford said. "I think it comes down to -- if it's not broke, don't fix it."

The company processes 100 pounds of dry biosolids per day, Ford said, and the new regulations could cost the small business an additional $1,000 each day.

Representatives of Lee County and Harvest Quest, Inc., both of which use sewage sludge to produce compost that can be sold as a soil amenity, also called for excluding their operations from the regulations.

Audubon of Florida representative Charles Lee said the proposed rules don't go far enough in protecting the environment, including Lake Okeechobee, the Everglades and the Caloosahatchee and St. Lucie rivers in South Florida. The group issued a report earlier this year calling on the state and utilities to end the land disposal of sewage sludge in the Lake Okeechobee basin.

Lake Okeechobee, Lee said, already is close to exceeding state limits on phosphorus in waterways. Dumping more sludge in the form of fertilizer on crops could further harm the Everglades ecosystem, he said.

So what's the point about how the residuals are being hauled to the field? What's wrong Charles, should they instead be using more trucks instead of being fuel efficient?

I think the point was to give us an example of "how much" residuals are being hauled to the field.

Great work FloridaEnvironments.com. Keep it up.

By land applying liquid sludge to farmland correctly we can reduce greenhouse gases that drying sludge equipment creates. Keep it simple and save our planet!

Once treated correctly and allowed a sufficient time to sit the sludge is harmless on animals as well as water.It's really a super grow.

Both liquid and dried not dry sludge is harmless once treated correctly but is a super grow.I've used it on my small garden and lawn before and it works great!!!