With the state now working toward a goal of 75 percent recycling, some innovations may hold promise in Florida's future of waste management.

An energy bill signed last year by Gov. Charlie Crist established a 75 percent recycling goal for the state to reach by 2020. The bill directed the Florida Department of Environmental Protection to come up with a plan for meeting the goal by Jan. 1, 2010.

The group Sustainable Florida recently awarded two waste programs for representing some of the best sustainability practices around the state. They were Waste Management Inc. of Florida for its single-stream recycling programs and the city of North Miami for its partnership with RecycleBank. 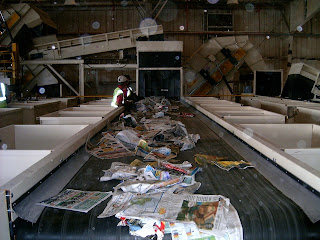 Waste Management says last year it boosted recycling by 38 percent at its Pembroke Pines waste processing facility and by 17 percent at Orange County's facility, which the company operates. The company attributes its increase to new "single-stream" recycling programs that don't require homeowners to sort recyclable materials.

Rather than having separate recycling bins for paper and containers, residents in those areas now put glass, paper, cans and plastic containers all in one bin separate from the garbage. A processing line with a magnet and various screens is used at the waste processing plant to sort the recyclable materials.

"The most important thing about automated single stream: It's easy," said Larry Dalla Betta, municipal manager in Florida for Waste Management Recycle America. "It's user-friendly. People don't have to sort into those carry bins."

Some companies that buy recyclable materials a few years ago were raising concerns that mixing materials such as glass and paper could ruin them for recycling, but those concerns seem to be going away, industry observers said.

"At this point it (single-stream recycling) is the preferred method they are looking at because it saves costs and labor," said DeAnne Toto, managing editor of Recycling Today magazine. "It really is the way most new MRFs (materials recycling facilities) are being designed."

"They can't come back and say single-stream (recyclable materials) are contaminated and no-good," he said.

Officials at the Florida Department of Environmental Protection, which collects recycling data, confirmed that Orange County's recycling rate increased by 17 percent last year. But the department couldn't say whether the Waste Management operation caused the increase or whether other recycling facilities also contributed.

The department also couldn't confirm the increase at the facility in Pembroke Pines, which accepts waste from more than one county. Dalla Batta also credited Miami-Dade County for a publicity campaign that helped increase recycling there.

In North Miami, the city partnered with RecycleBank to pay residents to recycle. Residents receive a 96-gallon recycling cart and households begin to earn points towards gift cards and products with companies based on the amount they recycle. 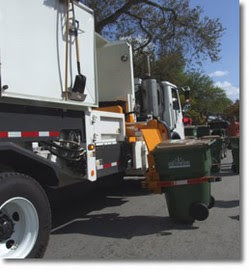 The city reports that recycling increased from an average of 20 tons per month to 128 tons in the first month of service, saving $6,000 per month in disposal fees.

A radio-frequency chip in the recycling cart identifies the cart owner. The cart is weighed and the homeowner's account is credited for the recyclable material. Those credits can be redeemed for vouchers that can be used at participating merchants.

RecycleBank and single-stream recycling can help the state meet its 75 percent goal, said Ron Henricks, program manager for DEP's recycling program. But he said there's no magic bullet for achieving the goal.

Florida recycled 28 percent of its waste in 2007. Henricks pointed out that about two-thirds of the waste produced in Florida is in the commercial sector compared to one-third in residential.

It is time for municipalities to step up and require businesses to recycle.