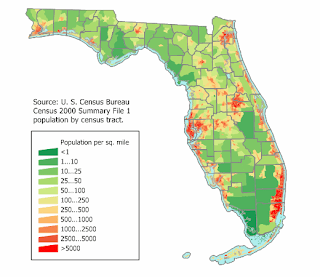 Florida every year since 1990 has added the equivalent of Miami's population -- about 395,000 people, legislative staffer Amy Baker told House members last week. But that annual population growth rate of up to 2.6 percent dropped to 0.7 percent this year.

Growth could stay that low for a couple more years before leveling off at about 1.1 percent -- about half of what the rate increase had been, Baker said.

St. Petersburg's estimated population in 2007 was 253,369, according to the University of Florida.

Fewer people moving to Florida could mean less less pressure to build new roads, schools, hospitals and shopping centers. One growth-management advocate says areas now designated for development may not be needed in the future.

"Florida's population growth typically in the past has slowed during recessions as it is in this recession," said Stanley K. Smith, director of the Bureau of Economic and Business Research at the University of Florida.

"The lion's share of growth comes from migration," Smith said. "During recessions fewer people move into the state both because of declining job opportunities and difficulties in selling their homes. What we are seeing now is not unusual in the sense these types of slowdowns typically occur during recessions."

Charles Pattison of the growth management advocacy group 1000 Friends of Florida said the slowing growth points to the need to develop in the right places. Those are areas where schools, roads and other government services are available as opposed to areas beyond the edges of cities.

The slowing growth, he said, also should encourage local governments and residents to reassess land development patterns, which he added may be based now on unrealistic population growth rates. But he also said that local governments have shied away from reducing allowed growth because of fear of facing a property rights challenge.

Charles Gauthier of the Florida Department of Community Affairs agrees there are legal restrictions on scaling back zoning. But he said reduced population growth may make it more difficult for local governments to justify new infrastructure projects -- or adopt future land-use map amendments.

"That could be one of the most primary visible effects of this," said Gauthier, director of DCA's Division of Community Planning.

"We need to make sure the business climate is amicable to putting people into housing and into homes which produces revenue for the state coffers," she said.